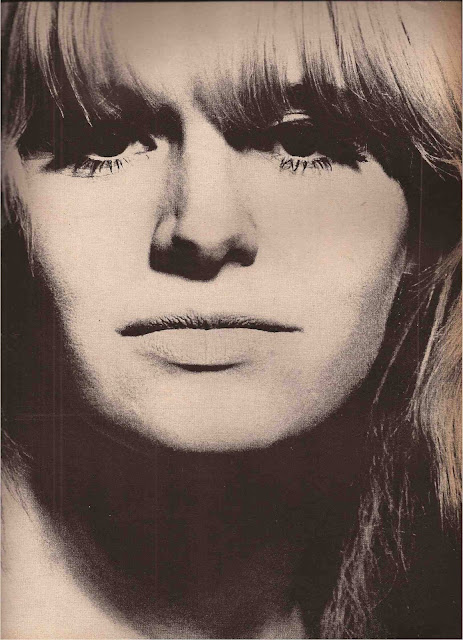 Born in Hammersmith, London in 1943, Carol White was hailed as the "Battersea Bardot," and "the new Julie Christie" entering the sixties as a promising young ingenue with supporting roles in Carry On Teacher, and, as Peter Seller's girlfriend in Never Let Go.

She made the leap to stardom after her lead role in the British Television Drama Cathy Come Home, a BBC television play about homelessness that ranks as the highest placed drama on the list of the British Film Institute's TV 100 of the 20th century.

Taken at the time of her widely critical acclaim, this photograph, by David Bailey, accompanied a story on her star appeal featured in Vogue's "People Are Talking About..."

Having just completed three films, Poor Cow, opposite Terrance Stamp, I'll Never Forget What's His Name, with Oliver Reed, and The Fixer, along side Alan Bates and Dirk Bogarde, White was hailed as the next "it girl," and one of the most promising female actresses in British cinema during a decade of all things "British" being on the international entertainment world's radar.

Sadly, once Hollywood beckoned, White found fame a hard road to navigate and fell prey to the excesses of the times. Unhappy relationships, and drug and alcohol abuse chipped away at her successes and prompted a downward spiral that caused erratic behaviours that harmed her professionally.

Carol White died in Miami, Florida at the age of 48.

Posted by devodotcom-devocanada-femaleandfatal-vintimage at 9:23 PM