HARPERS BAZAAR APRIL 1965 - THE MOST MODERN ISSUE EVER PART II 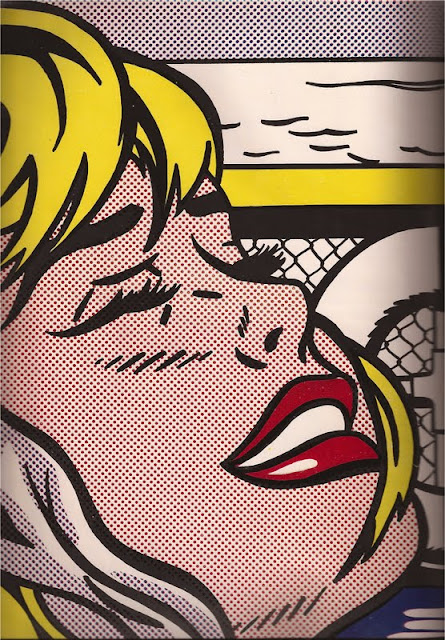 WHEN SHE entered young professor Lovelock's life, everything changed for him. "I want to kiss you!" the love-sick scientist kept thinking all day log, letting his kenetic-molecular hypothesis go hang. No Wonder! She contoured her mouth - alluringly, lusciously - with one of the new wild colors: Mauve, Red, Orange or Cocoa, applying a coat of clear yellow or white opal for highlight only to the lower lip! Naturally, the doomed young scientist gave up his search for the ultimate particle and became the slave forever of wild, wild, Dorothy Gray!! 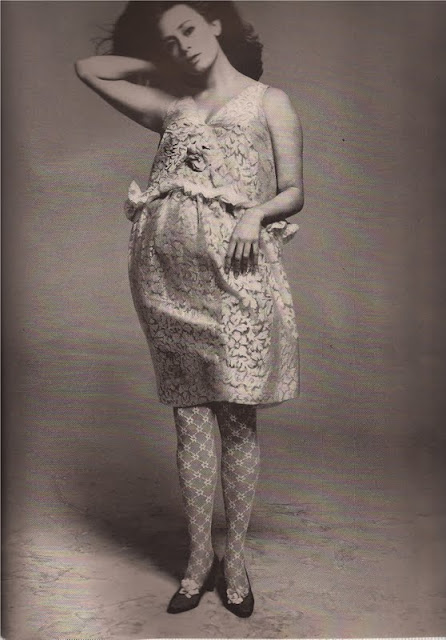 Rhodora! if the sages ask thee why
This charm is wasted on the earth and
sky,
Tell them, dear, that if eyes were
made for seeing.
Then Beauty is its own excuse for
being.
- Emerson 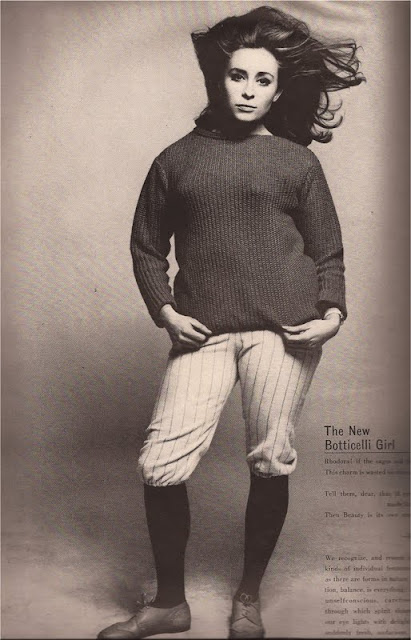 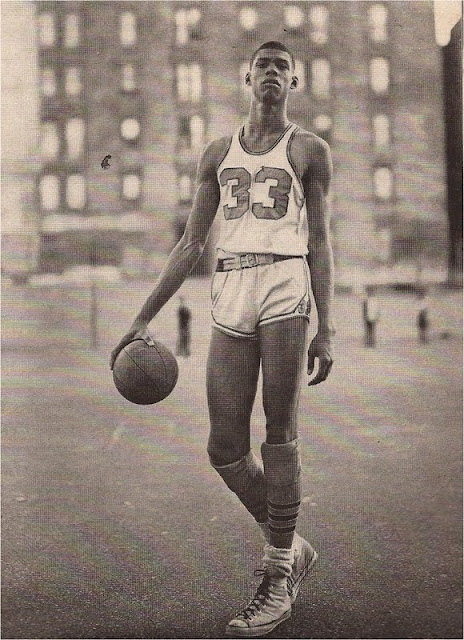 
A young giant of a boy, Lew Alcindor, called by his equally young fans, who patiently follow him everywhere, "El Cid" is what's about to happen in basketball.

Once more the frankly feminine returns to fashion. Lovely, luscious Sarah Lownds wears low-cut, deeply V'ed, black and white checks - the skirt, a panorama of pleats. The flirty knickers, kissed at the knee with a white camelia. Dress by Teal Traina.


"Dick's portraits of impossibly thin kids like Bob Dylan and the six-foot-seven basketball sensation Lew Alcindor were separated from the ravishingly plump Bibi Winkelhorn and Bob Dylan's wife Sara with a story by Tom Wolfe." 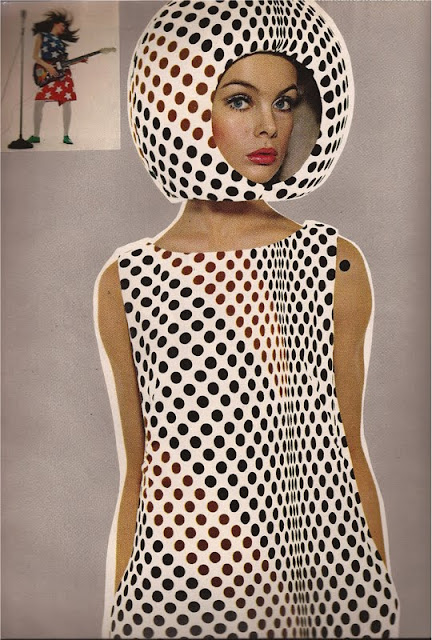 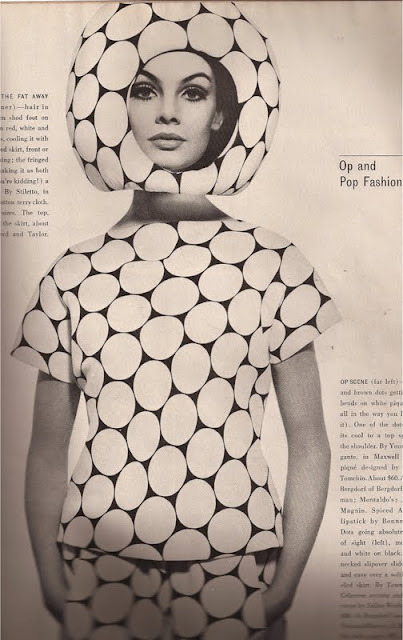 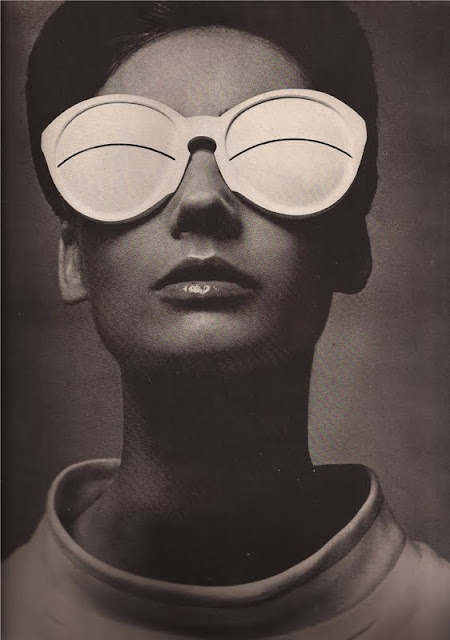 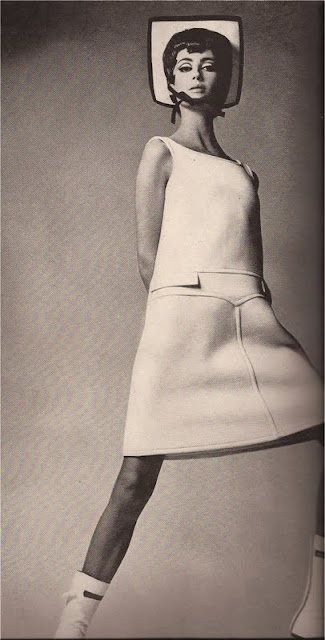 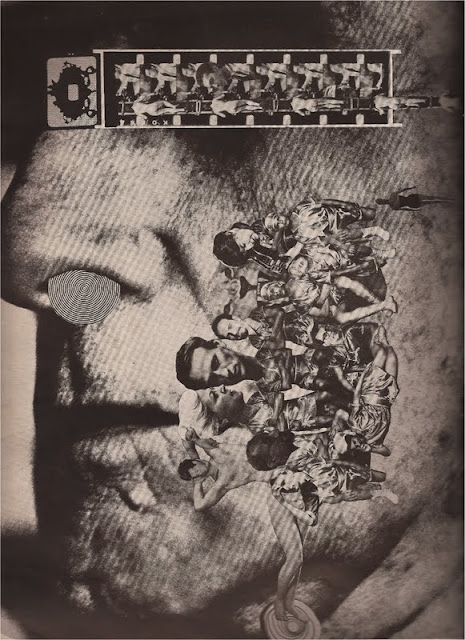 Original montage using photographs of foremost film makers, (including himself) of underground movies (the name he coined for the controversial new American film trend). 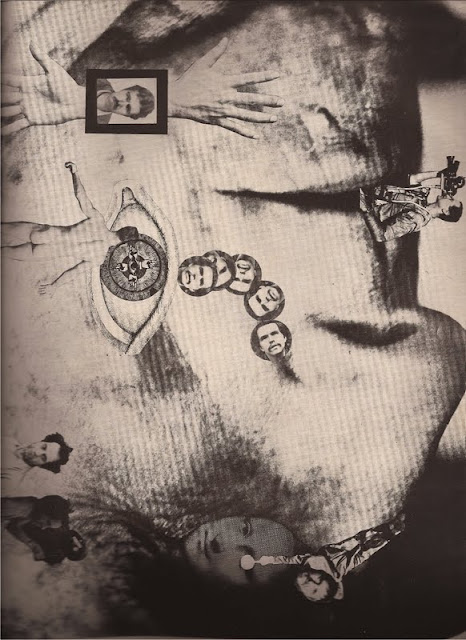 The Galactic Girl On The Moon 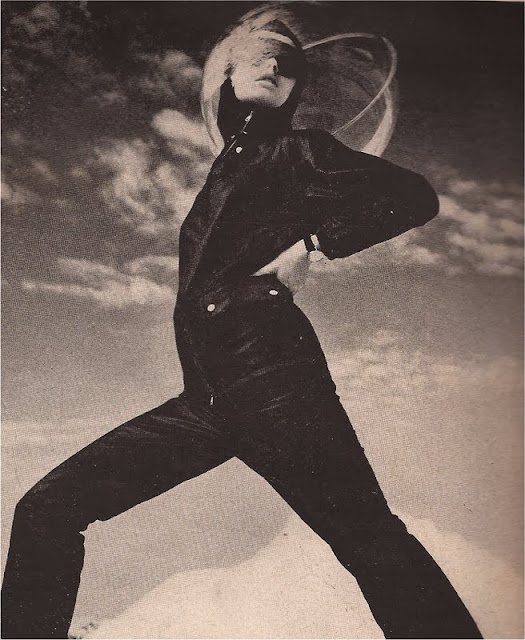 Madly Wonderful for boating on any planet you can name (and some that re about to be), a sleek black waterproof sailing suit with a dual personality parka. It turns turtleneck when you fasten the snaps. By Ernest Engel. 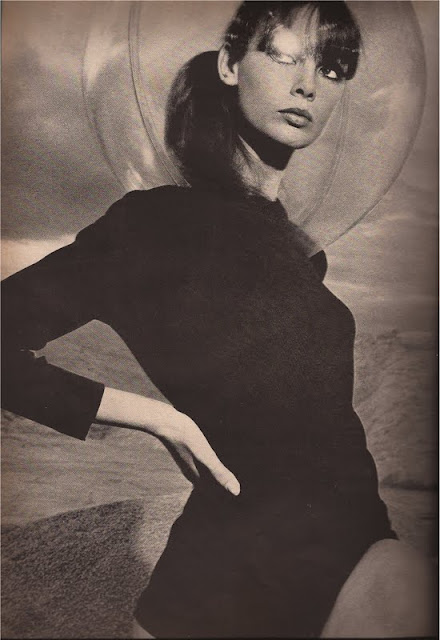 The Galactic Girl makes the sun scene in suits that are simply Sam. Navy blue knit after-swim suit zips all the way down the back, beautifully moulding the bird. By Bess Art. 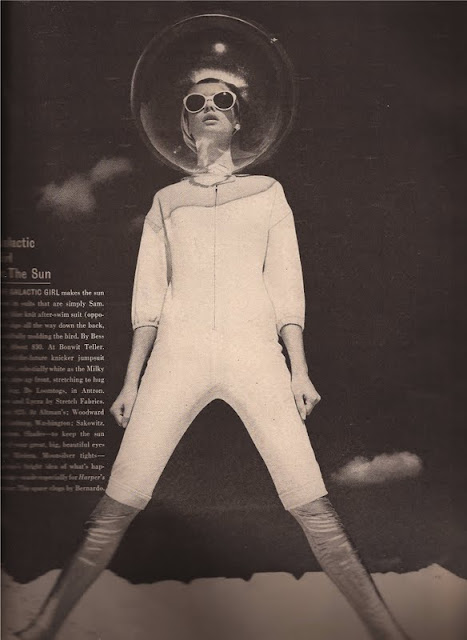 Look-of-the-future knicker jumpsuit, celestially white as the Milky Way, zips up front, stretching to hug the bug. By Loomtogs. Shades, to keep the sun out of your great big beautiful eyes by Riviera. Capezio Moonsilver tights. Space clogs by Bernardo. 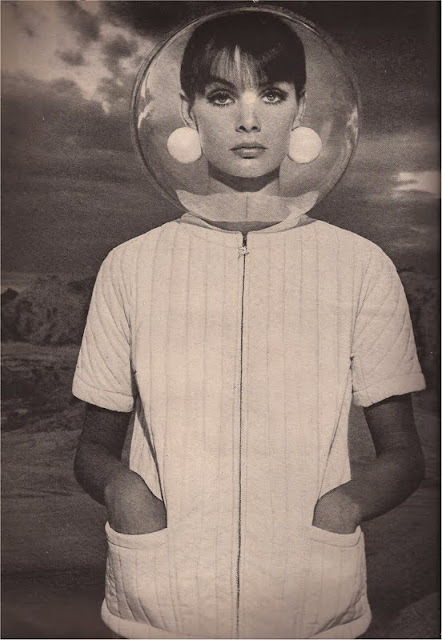 The Galactic Girl On The Moon
Jean Shrimpton


The Galactic Girl sails away in a ring-a-ding little sailing jacket of cloud-white nylon.Quilted on the vertical, zippered down the front. By White Stag. Epic white globe-of-the-world earrings by Arpad.

"To photograph "the Earth Girl" reclining on a conquered moon, on January 11, Avedon needed a location that would look like the lunar seas, and he found it at the DIMAR Construction Company's quarries, a vast site piled with mountains of white gravel on Route 84 in Fort Lauderdale." 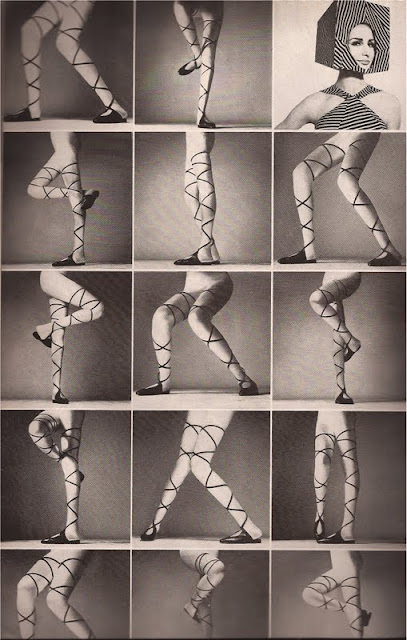 Testing
The pull of gravity, lunar legs clad in shimmering silver, bound securely by the thongs of a new excercise sandal in softest black glove leather by Herbert Levine. 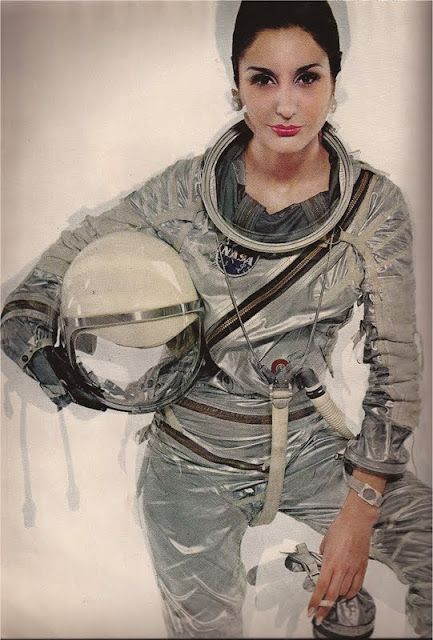 To be continued...
Posted by devodotcom-devocanada-femaleandfatal-vintimage at 1:45 PM