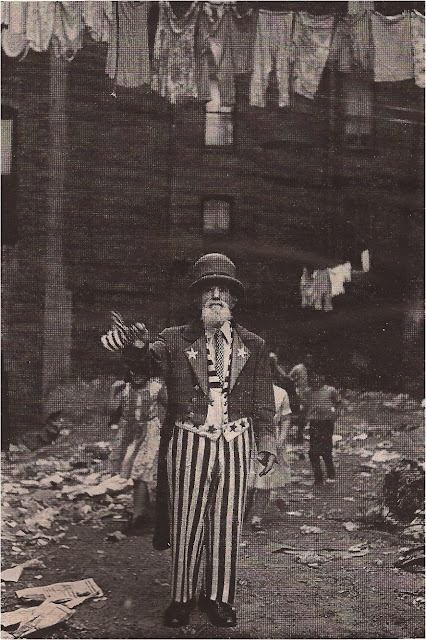 THE FULL CIRCLE
Who is i that can tell me who I am?  Shakespeare

MAX MAXWELL LANDAR has become Uncle Sam. It happened that about a year ago a patriotically-named tax advisory service conceived the notion of advertising itself by means of a sandwich man in an Uncle Sam costume, so they had a red white and blue suit made at a cost of $175 and hired a tall Negro man to appear in it: but a week had hardly passed before some goons drove up and threatened to beat him up if he didn't quit, so he did. Somehow Max inherited the job and the suit, which so well becomes him, although it is too large, that his dreams inhabit it too. He has worn it professionally as sandwichman to a barber shop, a pen company and an exterminating service, but chiefly he wears it to advertise himself.

Says Max, "Last year this time I was nobody, now I'm somebody.... I am what I call a Personality... without a doubt the youngest 80-year-old man in the world... my beard is now like Bernard Shaw's, even if it doesn't grow it's out of this world, and my face is interesting... when I'm ready I'll be Buffalo Bill from the back... I've got the greatest laugh in the country and the world... I am writing my life story which will be similar to Mission To Moscow which Dwight D. Eisenhower wrote... I am a soprano-contralto, the greatest singer in the world today and I have the voice of a man, woman and child... I'm going to Hollywood... there is no question about it: I'm going to be rich and famous... I can prolong the life of the leukemia victims of the world and Eleanor Roosevelt and Bob Hope will take care of cancer... I am ordering Congress what to do and I'm sure I'll have a meeting with Kennedy... I am a Phenomenon... M...E...ME!"

Max lives on the Lower East Side with his dedicated Negro servant Georgia, trudges the streets, tireless as the seven dwarfs, stopping traffic with his imperious hand and repeating his name to anyone who will listen or even to anyone who won't. He says he is the first person authorized to be Uncle Sam since 1812 and he plans to bring the Liberty Bell to New York. He took me to Washington for the Inauguration, walking from one end of the train to the other the entire way, proclaiming his mission. The plan was for me to photograph him being The First Man to Shake the Hand of Dwight D. Eisenhower when He Was No Longer President, but we couldn't get close enough. Instead we slept on benches in Union Station; he sold leftover campaign souvenirs inscribed "Kennedy Will Win" to finance the trip home; and he climbed the Washington Monument in a blizzard, all 898 steps of it, in 48 minutes, solemnly delivering his oration to George Washington at the bottom, for an audience of the five guards and me. He sometimes suddenly imitates Shirley Temple, and he can simultaneously eat a doughnut and sing without moving his lips. At Christmastime I helped him buy several editions of a plastic Nativity Scene at Liggetts for 99 cents, which he sent to the Kennedy's for their newborn son and to Clarke Gable's widow for the forthcoming child. He is planning to send something to the Pope and to Cardinal Spellman, too. Max is a master optimist. "God is good to me," he said once. "Unless I die I can make a lot of money, and of course," he added shrewdly, "if I die, you've got something."