THE FULL CIRCLE  Who is it that can tell me who I am? Shakespeare 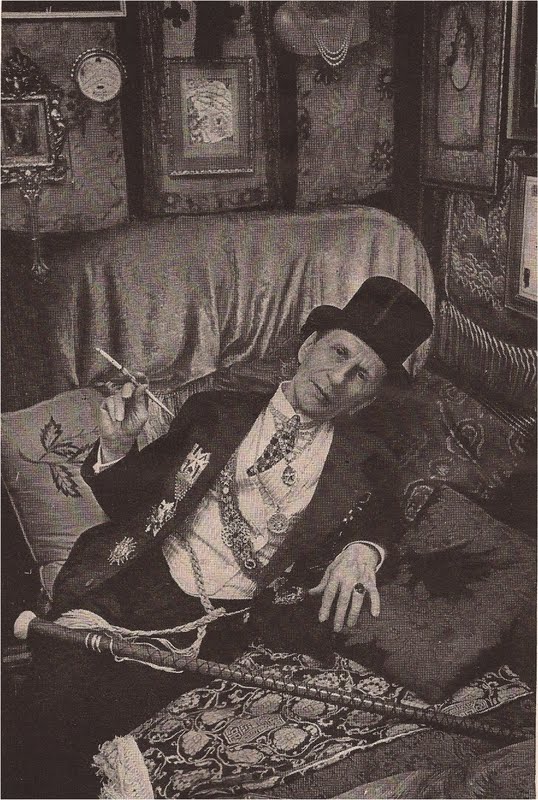 Prince Robert de Rohan Courtenay, surnamed the Magnificent, the rightful Hereditary claimant to the throne of the Byzantine Eastern Roman Empire – styling himself His Imperial Majesty, the Magnificent Emperor of the Byzantines and of the faithful Romans, Semper Augustus – was born in Oklahoma in 1886, having lost his Empire, along with a treasure valued at $90,000,000, when the Turks overran it in the year 1453.  His Serene Highness is the Titular Sovereign of Constantinople, the Imperial and Serene Chief of the Amorican Dynasty, the Grand Duke Sebastocrator, the Hereditary Porphyroginitor and Serene Dynast, The Byzantine Patriarch of Trebizond and of Alixandria, the Autocratic Sovereign of Nicaca and Bythiinia. He wears the decorations of Hereditary Royal Grand Master of the Sacred Order of Military Chevaliers of the Star; Hereditary Commander and Supreme Royal Knight of the Sacred Order of the Five Mystic Stars of the Orient; Exalted Commander of the Transcendental Order of the Esoteric Treasure of the Three Emeralds; Hereditary Commander and Supreme Royal Knight of the Grand Order of Constantinople, the Regal Order of the Imperial Crown, and the Imperial Order of The Golden Tassel; Hereditary Exalted and Supreme Royal Commander of the Grand Order of Teresa Sophia, and Hereditary Supreme Royal Knight of the Imperial Order of the Inner Council. He has in his possession an illuminated genealogy tracing the unbroken royal-male lineal descent, primogeniture, from the year 820 to the present.

He lives in a bejeweled, encrusted, embellished and bedizened 6 by 9 foot room on 48 Street, called The Jade Tower, with a ceiling of orchids and painted butterflies, a legendary lantern, tasseled silken hangings, golden ornaments, a vermillion floor, an American flag and two padlocks on the door. On his left hand he wears a genuine 43-carat pigeon-blood ruby ring; in his bureau drawer he keeps the ingredients for his breakfast of three raw eggs and a pat of butter in hot coffee.  On his walls are his own thousand splendid fantastical paintings of nymphs in Oriental sunsets and under his bed his 9000 poems and writings entitled The Hypnotized Mandarin and O Lalla Palloo. A fragment of his composition follows:
O Inoy Ouno
O Heehus urche sfort rash
SOS urli findson litrash
Which, by reading phonetically and unscrambling the space between words, translates: O, I know, you know/ He who searches for trash/ So surely finds only trash.

The Prince is considered to be a very forceful man with the heart of a lion and a loveable and understanding nature. At least one woman is reputed to have killed herself (in 1934) for love of him.  He is well known as a philanthropist and friend of the underdog (sponsor of the Skid Row Legion) and I accompanied him one evening on the Bowery where he dispensed cigarettes and monies to the delighted derelicts.

If his Empire were restored to him, he would model its Constitution after that of the United States with the additional proviso of Absolute Power for the Emperor; but he does not seek this destiny, preferring to live quietly as he does, enjoying the nightly society of his friends in the 57th Street Automat.  He has prudently avoided venturing near Constantinople, the hereditary Capital of the Empire, where several of his ancestors were assassinated; but some years ago five friends, under the leadership of a certain beautiful Circassian known as the Lady X, formed an expedition to search for the Prince’s lost treasure which lies buried in four underground vaults. Before leaving, the Lady X suffered a change of heart, saying, “Prince, let me stay with you.” But he persuaded her that it was best that she go, conferring upon her the title of Countess.  Some months later the Prince was taking the air of a warm summer evening on the Staten Island ferry when a swarthy stranger approached him from behind saying he had a message for the Prince, handing him a small package and vanishing as suddenly as he had appeared.  In the package was a silver box and in the box a shriveled human finger on which he recognized the ring of the Lady X.  The shock was immense and he experienced that “striated regret” of realizing that none of his friends were ever to return.


The Prince signs his work with a symbol representing the sun above, the earth below, and himself as a splinter, descending. And here is something I found among his writings: “So with growth, changing environment and the vagaries of fortune, the facets of a mans life so vary, in a seeming and rapid inconsistency, that he appears to live his life as a succession of characters – in different dramas – sometimes high sometimes low – and his innermost secrets are hidden in Time; and Time knows nothing! To outsiders, the personal history of anyone is merely a legend, imperfectly understood – and a fable believed and agreed upon!”

Posted by devodotcom-devocanada-femaleandfatal-vintimage at 7:40 PM