HAPER'S BAZAAR APRIL 1965 THE MOST MODERN ISSUE EVER PUBLISHED 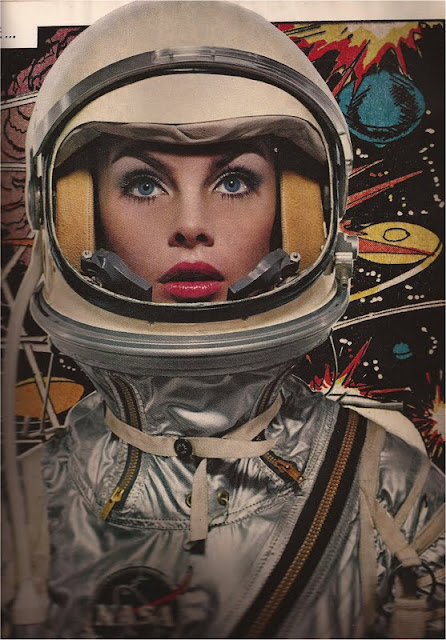 "Dick Avedon, at the time the most influential photographer on earth, suggested I work as his editorial assistant on the April 1965 issue of Harper's Bazaar. He had been asked to guest edit the magazine, the first time this idea had been put forward. He had agreed, provided there would be absolutely no control or direction from Nancy White - the editor of Bazaar since Diana Vreeland's departure to Vogue."
Nicholas Haslam
Redeeming Features 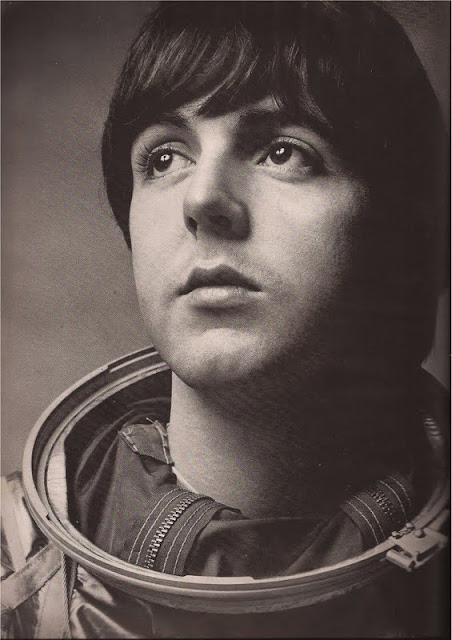 The Man of the Moment
Paul McCartney
Cosmic, yes, yes, yes, sends the faithful into orbit with the Mersey beat and Mersey sound of the music he writes for fellow-Beatles, John, George and Ringo. 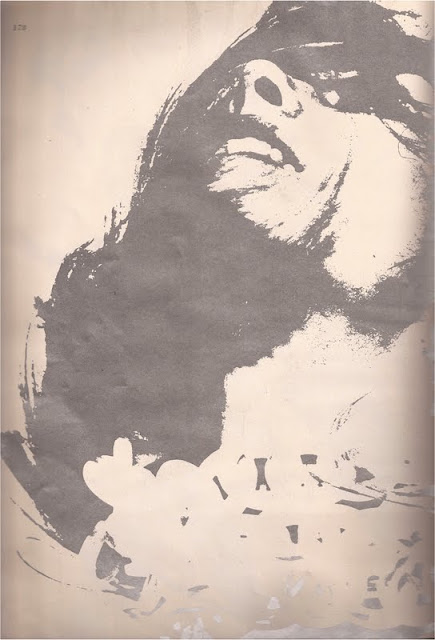 We were given carte blanche to do what we wanted, and Dick said it unquestionably had to be the most modern issue of a fashion magazine ever published. 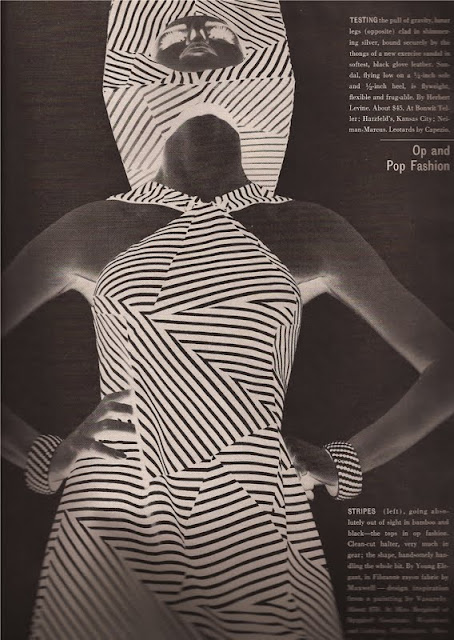 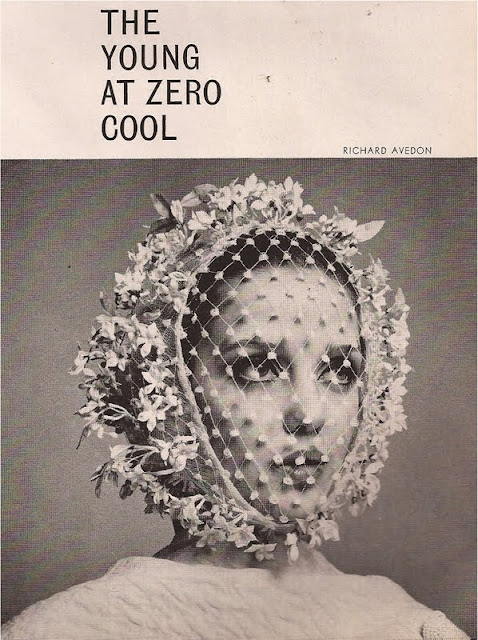 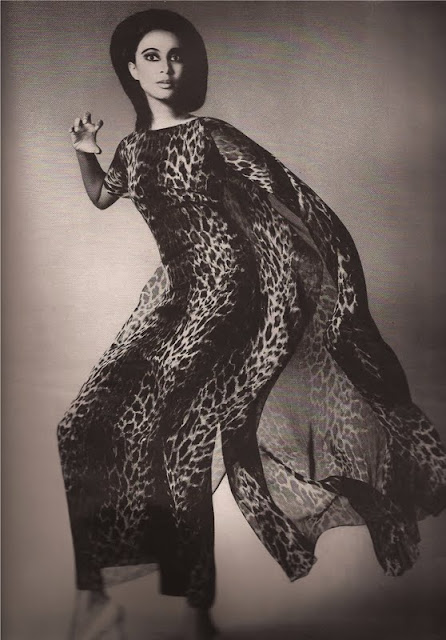 "In a bar in Chicago, Dick discovered the exquisite, long-limbed Donyale Luna, who would become the first instance ever of a black model being used in a "white" magazine. We photographed her wearing the collection of the American couturier James Galanos. The chief cutter at Galanos, herself a black woman, told James - and us - that she would quit if Donyale appeared in the magazine wearing clothes she had made. Furious, Dick had to capitulate, cropping the pictures so that no telling features above Donyale's long slender neck were visible. On publication, hundreds of readers in the South wrote to Nancy White cancelling their subscriptions." 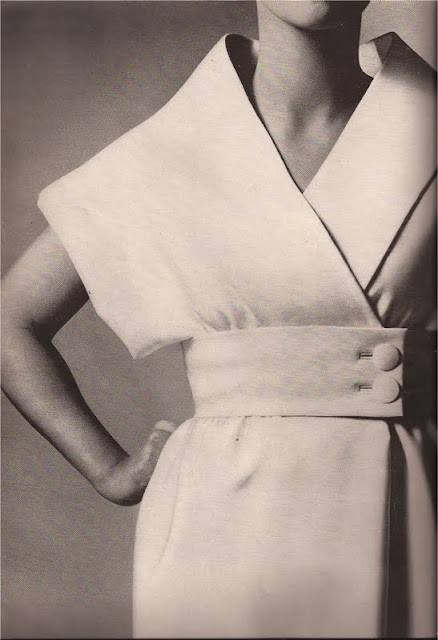 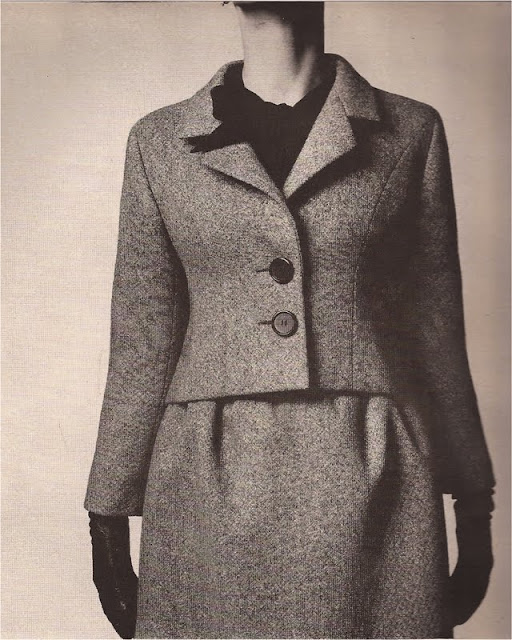 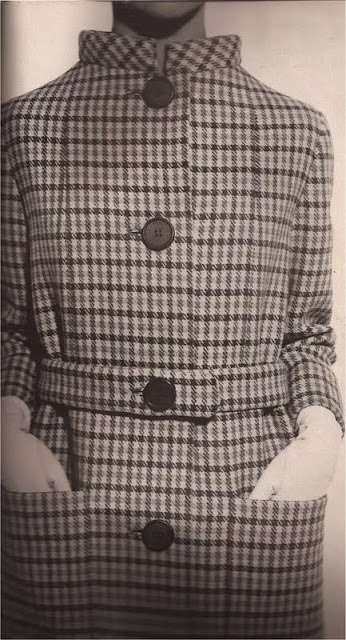 "Faced with the first black model, a James Galanos studio employee, herself a black woman, announced that she would leave if Donyale Luna appeared in the magazine wearing Galanos's clothes. As the story was later told, advertisers with southern accounts pulled there ads from the issue; still later, subscribers were said to have canceled their subscriptions, while William Randolph Hearst, Jr., whose family company owned Harper's Bazaar, relayed his displeasure to the editors."

There appears to be a case of time altering facts upon the recollections above. The issue demonstrates that it is the American couturier Norman Norell's designs that have the infamous cropped heads and the 'Luna in Galanos' display Donyale Luna in full beautiful stature. 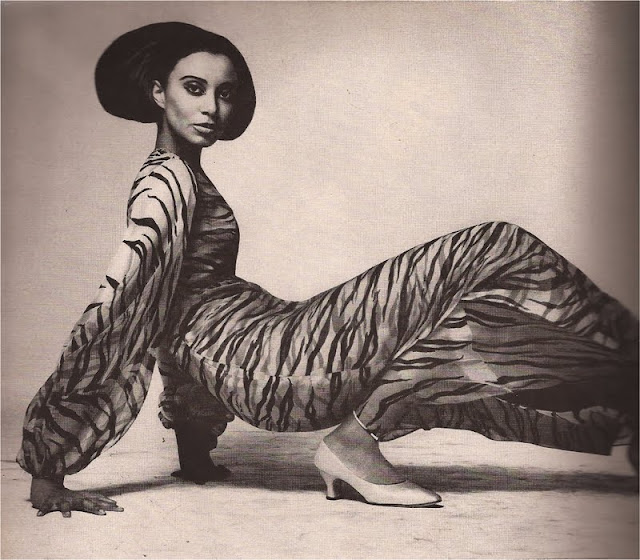 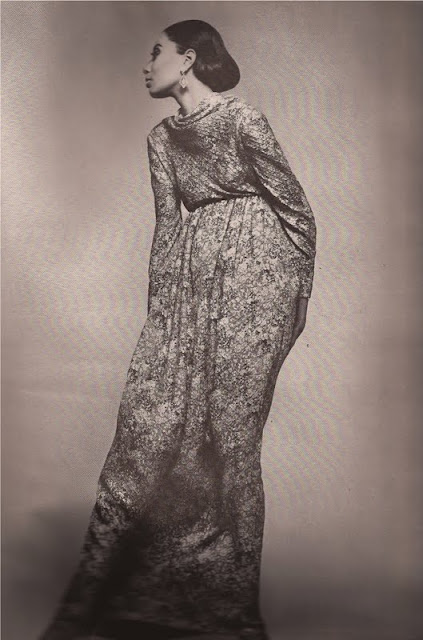 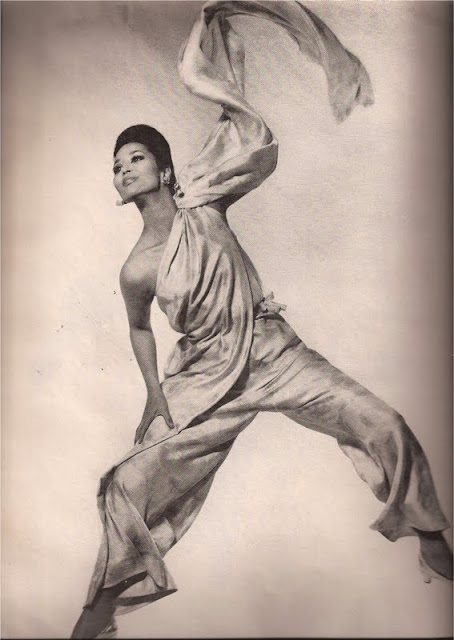 "The exquisite Eurasian model China Machado, "a capuchin monkey in the lap of Genghis Kahn," as Diana Vreeland described her." 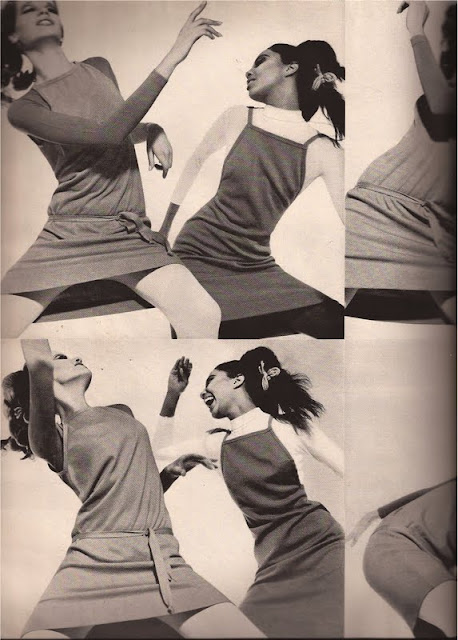 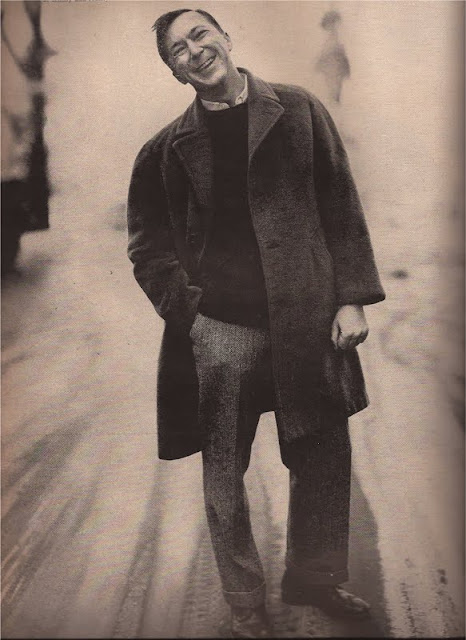 I persuaded the leading pop artists Roy Lichtenstein, George Segal, and Claes Oldenburg to make huge backdrops and sets for Marella Agnelli, Naty Abascal, and Dolores Furstenberg, the great beauties of the day, to be photographed against, wearing "Space age" clothes by the young Pierre Cardin and Paco Rabanne. 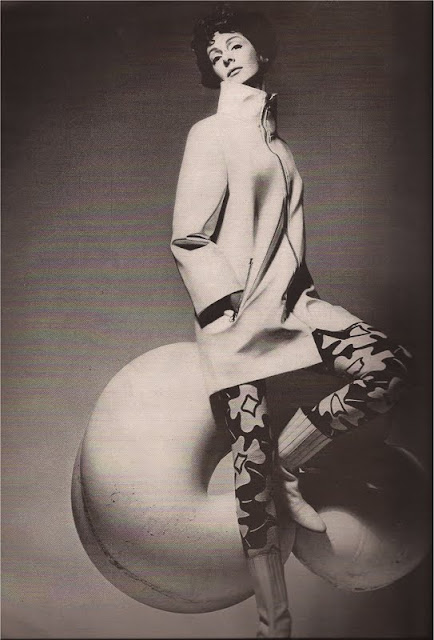 Marella Agnelli-The way it's going to be. Ineffable elegance, an aristocracy of being that transcends the illusory in fashion, simply, unselfconsciously exists. In wildly flowered tights, shining vinyl jacket and boots, Signora Agnelli leans on an Agostini sculpture, establishing, by example, the direction of fashion to come. 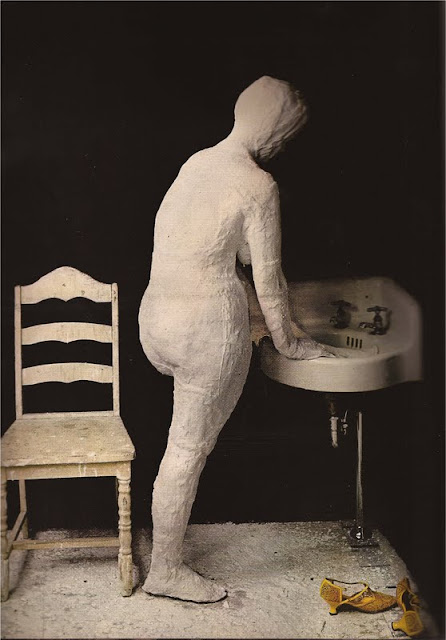 "The sittings with Shrimpton began on January 2,1965. That morning, in a Trenton, New Jersey, chicken coop, Avedon had shot Pop artist George Segal's white plaster sculpture Woman Washing Her Feet, knowing at this point only that the practitioners of this movement - Lichtenstein, Claes Oldenburg, Stan VanDerBeck, physicist George Oster - might be the issue's '"most interesting contributors,"' alongside commentary by Renata Adler and Tom Wolfe, poems by Lane Dunlop and Ree Dragonette, excerpts from novel s in progress by Alfred Duhrssen and Marvin Cohen, and his own portraits of a laughing Jasper Johns, a clean-cut Rauschenberg. Ruth Ansel, puzzling over the place for shoes to appear - the shoe page was a Bazaar institution - had sent off for a pair of heeled chrome-yellow sandals, which she tossed under the white porcelain face bowl: a touch of Andy Warhol color in Segal's foreboding scene." 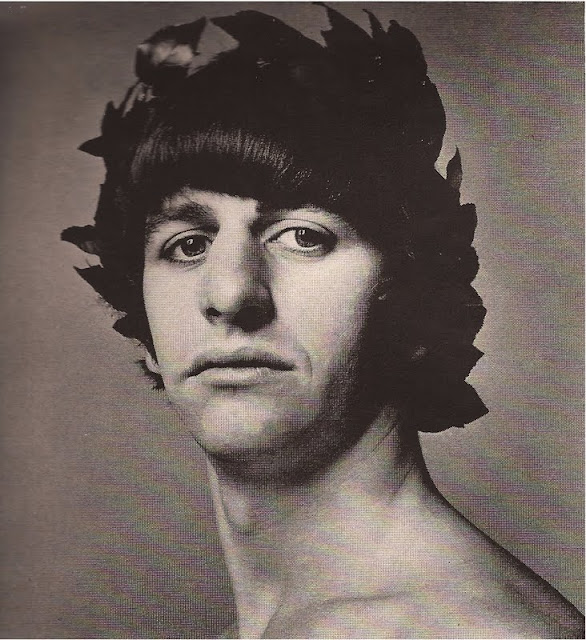 "I arrived early, along with Dick Avedon and China Machado, an editor of the magazine. A few other people were there also, including Tony Jones. The equipment got set up, Dick did the fashion shots, and then Paul McCartney and Ringo Starr arrived. Everything went smoothly and the guys were fun to work with.
After the photo session was over, only Ringo Starr, Avedon, China and myself remained in the studio. Then Ringo decided to challenge Avedon to a drinking contest.
Now, Dick was not much of a drinker, but he was game, and so they started downing vast amounts of whisky. This could only end in disaster. Or two passed out bodies, which it did. I took a few pictures of the results, which resurfaced recently and which I played with in PopArt Plus to give it a real Sixties feel. Yes, I know — this style is way past its use-by date.
A short time later, as I was packing up, both Ringo and Avedon were laying on the floor — one in the
bathroom and the other in the kitchen — oblivious to the world. What to do? To make matters worse, a group of Beatles fans were at the street entrance, waiting for Ringo. China made some calls, and arranged to have a private car go to the service entrance on Gough Street, out of sight of the fans. To get Ringo there, I had to carry him across the rooftop, and take him down the goods lift (freight elevator), depositing him in the waiting car." 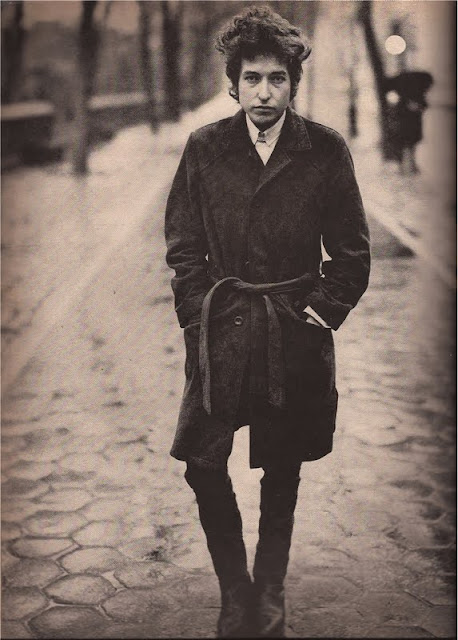 
The teenagers' troubadour came out of the West to wander restlessly through the country, playing and singing his own folk tunes, like "Blowin' in the wind." More of a words man than a musician, he sets his verbal flashes of insight to simple melodies that hush his audience. Now, five years later, his restless wanderings include brief but profitable stops at Columbia's recording studio which is releasing his latest L.P., Bringing It All Back Home. 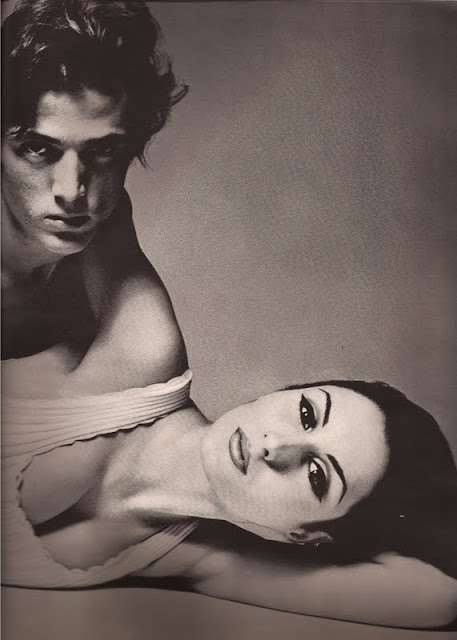 The Contemporary Art of Temporary Life
Dali's Discovery Adil
The awakening young faun is also the model for his latest painting, Hermes, which combines pop and op art techniques with a new three-dimensional process, on view this month at the Spanish Pavilion of the New York World's Fair. One name is an anagram of the other; so in a surrealist sense, Adil is Dali....The cool sea nymph appears in an imported maillot of rib-knitted cotton, unlined and white as whitest foam, By Lydia of Roma. 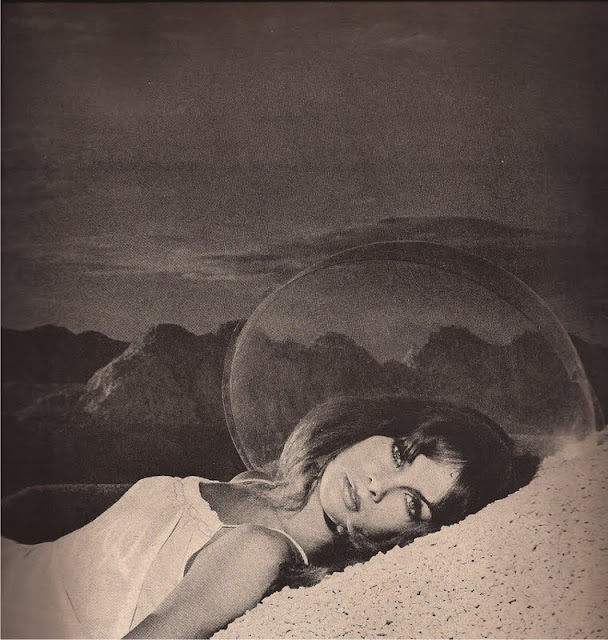 to be continued...
Posted by devodotcom-devocanada-femaleandfatal-vintimage at 12:33 PM