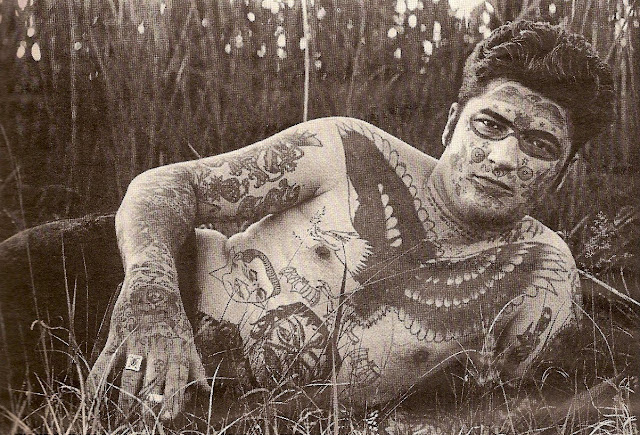 "Jack Dracula, the Marked Man, is embellished with 306 tattoos (estimated value: $6000), and although this work-in-progress conspicuously distinguishes him, he is living in seclusion and I have solemnly sworn not to reveal his whereabouts. There are 28 stars on his face as well as 4 eagles in varying postures, 6 greenish symbols shaped like doughnuts, a Maori mustache and a pair of trompe-l'oeil goggles. Under his hair is the winged cap of Mercury with a rose cluster across his crown. His first tattoo, about four years ago, was a hinge in the crook of his right arm, and now a bat nestles near his left collarbone, a 2-foot-wide eagle fies downward across his chest, a tiger and snake wrestle below his navel, a scorpion grasps a dollar sign on his right forearm, a werewolf stares from his kneecap and on the inside of his underlip in inscribed the name DRACULA. He is also adorned with winged dragons, a peacock, a geisha girl, a cigar-smoking skull in top hat, macabre butterflies, a hypodermic entitled Death Needle, a head of Christ, boats, swords, ghouls, chains, satyrs, cupids, penguins, The Horrible Three (Frankenstein, Dracula, The Phantom of the Opera); and one afternoon while I sat with him he put a small new rose on his thigh. There is also quite a lot of reading matter like I Love Money, Death Before Marriage, In Memory of Mother, Amor, Dolores, Barcelona Jack, Muerte, Sylvia, Theresa, the names of his three heroes - Boris Karloff, Bela Lugosi, Lon Chaney - and on his fingers the initials of some obscenity which his girlfriends were so good at deciphering that he finally converted the ones on his left hand into flowers.
Jack is tatooed simply because he wants to be."