SWITCHED-ON ... MORE FROM THE SUMMER OF LOVE 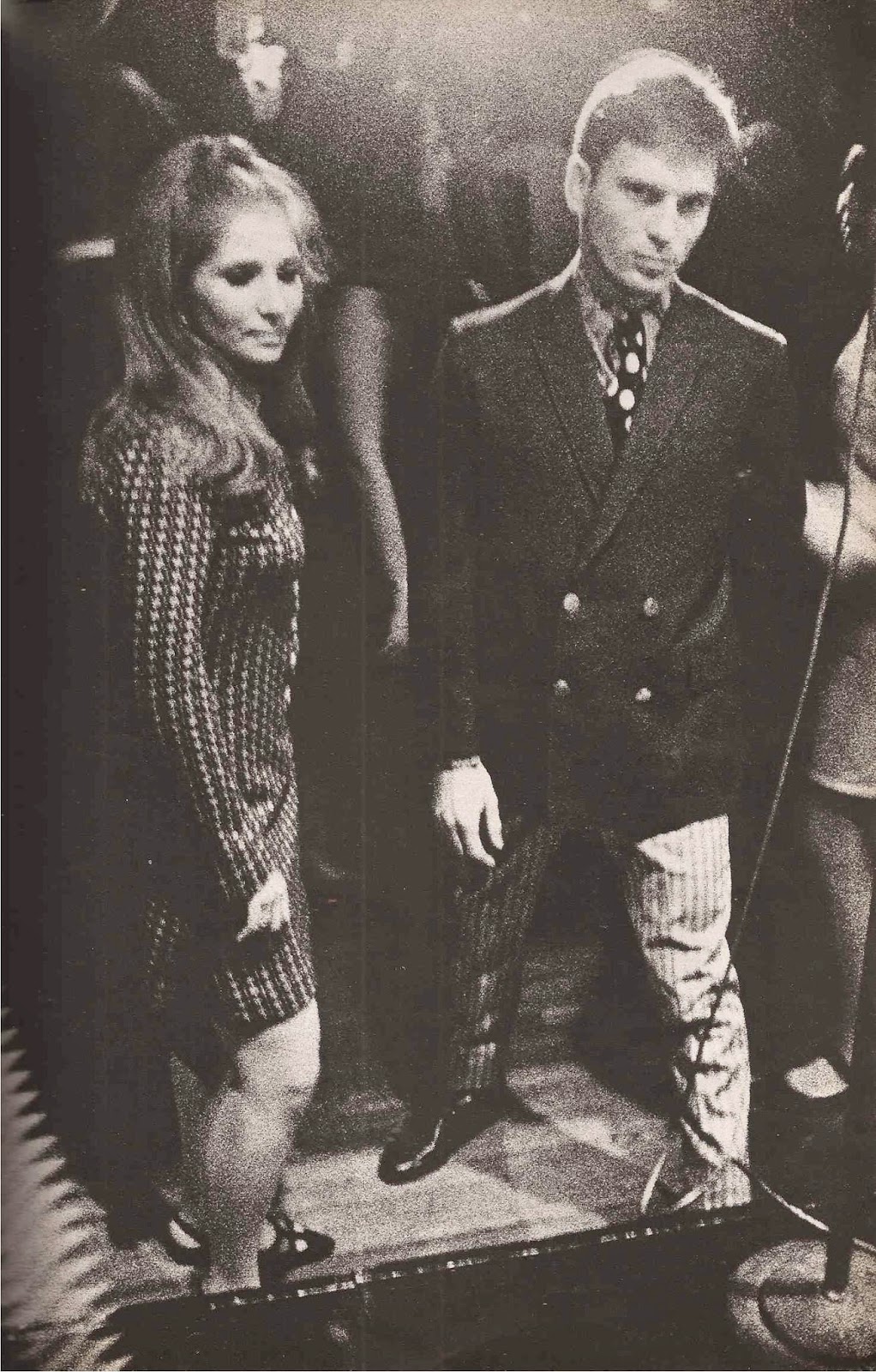 The big beat. There's this thing about fruggers...their clothes...they have to...move. Clashing. But,just the same, looking damned smart and not as though they were just grabbed blindfolded at a rummage sale.The term, we believe, is "switched-on." The scene is at Arthur,in New York. 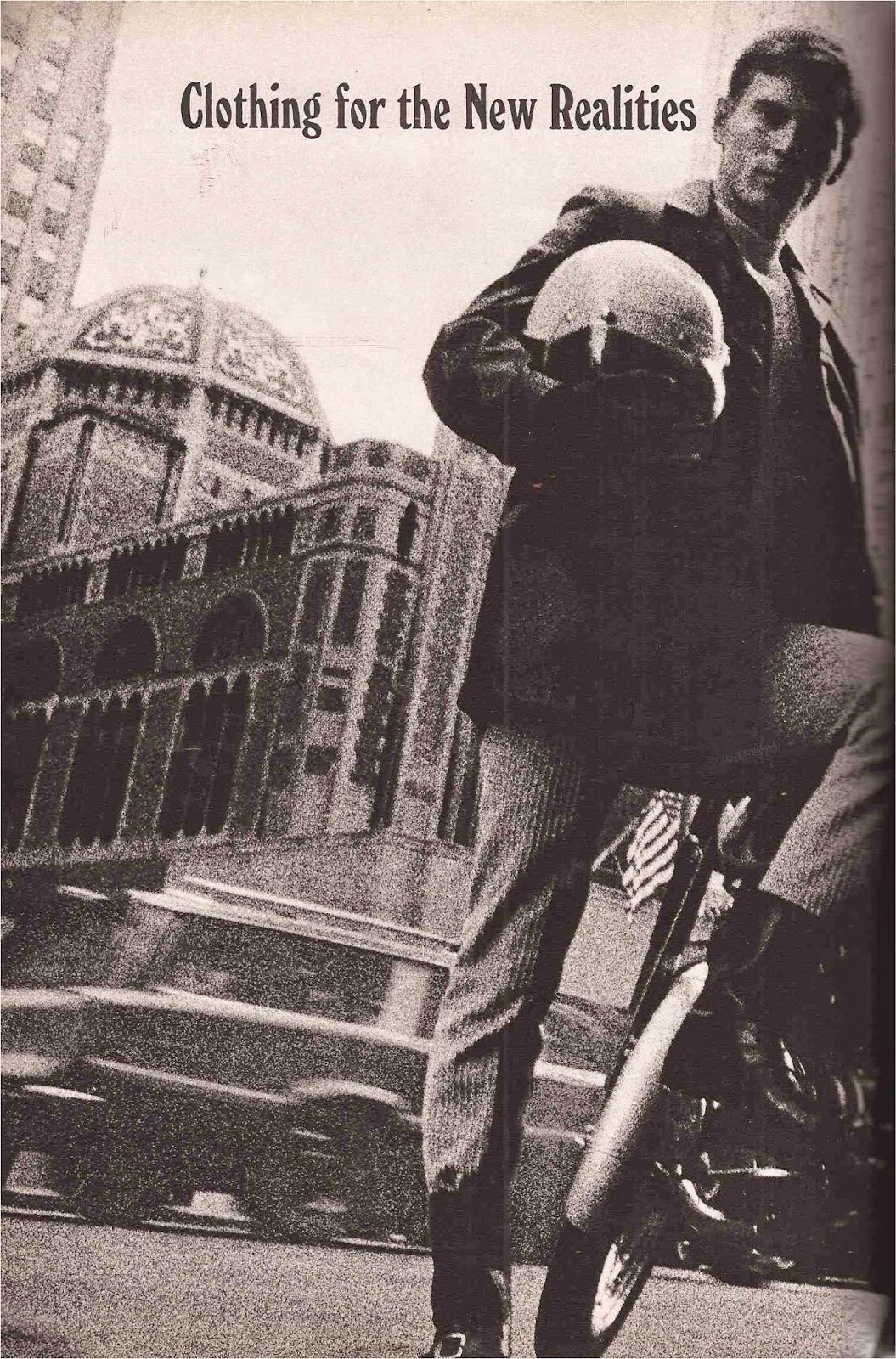 It is written in the scriptures -of New York State, at least -that as of January 1, 1967 A.D. all motorcyclists shall wear crash-proof helmets. Clothing should be tough, snug, but with "give."

Robert Gentry wears a leather windbreaker and wide-wale corduroys by McGregor. His medium-rise boots are by Renegades. The loose-knit turtleneck jersey is from Himalaya and his gloves are Daniel Hays.

Celebrants of the surf have always been notoriously independent of outside influence, not only in behaviour but in dress. Within their own order, however, they are almost totally subservient to the abiding sense of style. What one surfer wears, all will wear.

Robert Gentry wears Brentwood's "loincloth." There is more than meets the eye; a real bathing suit lies beneath. It's the old hip-hugger with a new twist. Hotter than surfer's knobs. Tarzan on a board.

7 Things To Add This Summer 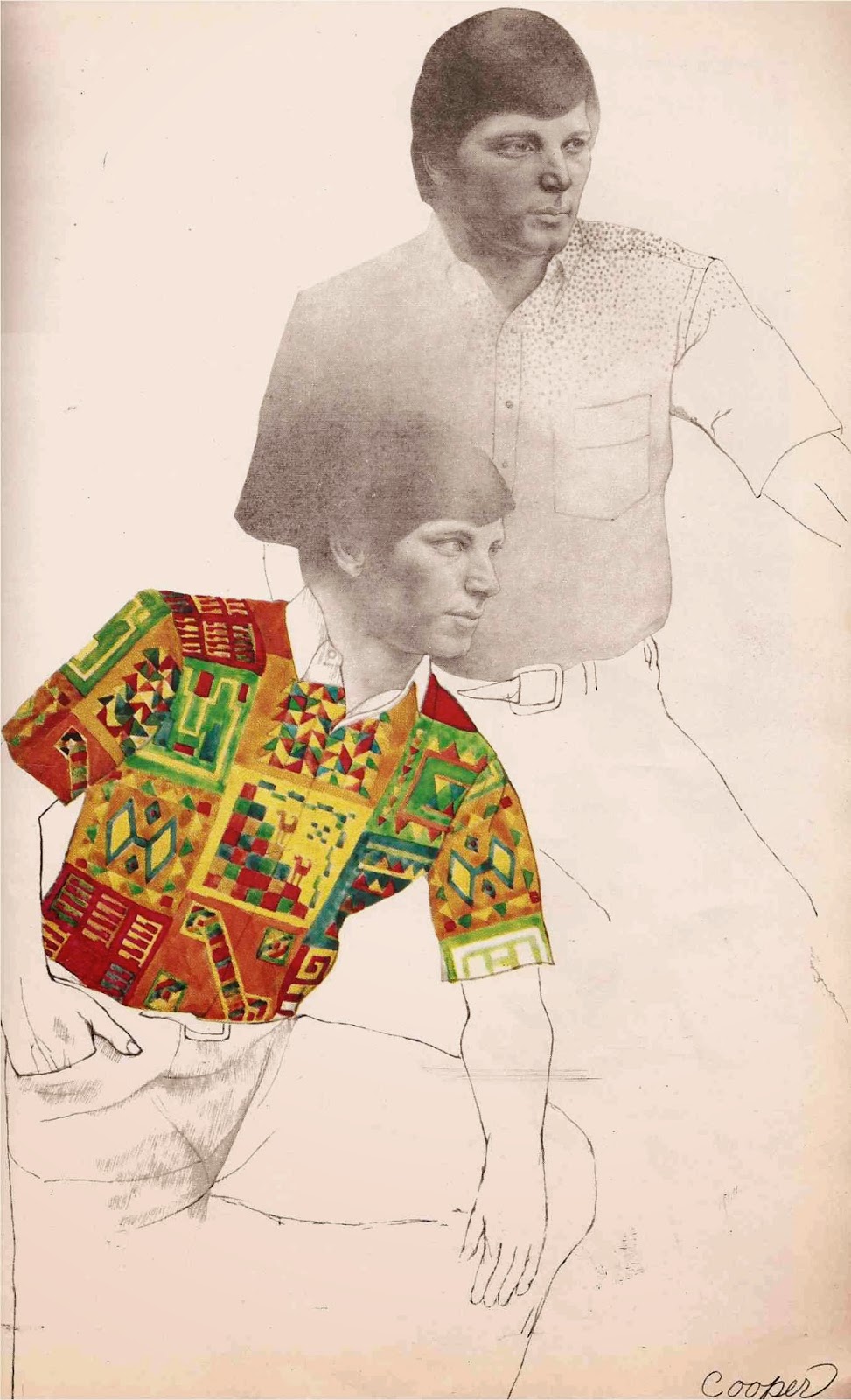 New emphasis on color and patterns puts the old shirt slightly out of style. The non button-down shirt will be seen increasingly often. 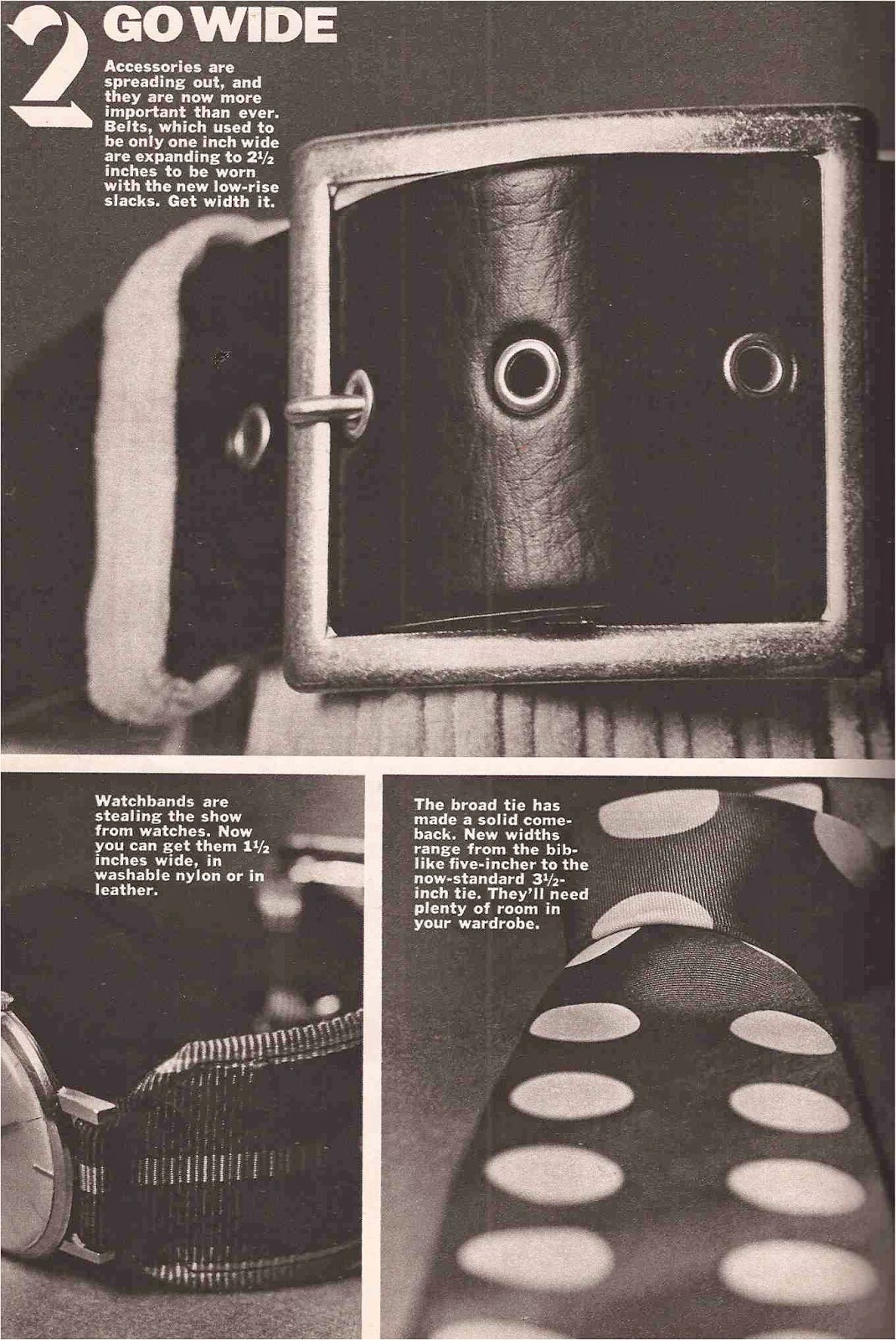 Accessories are spreading out. Belts go from one inch to two-and-a half inches to be worn with the new low-rise slacks. The broad tie has made a solid comeback. Watchbands are stealing the show. 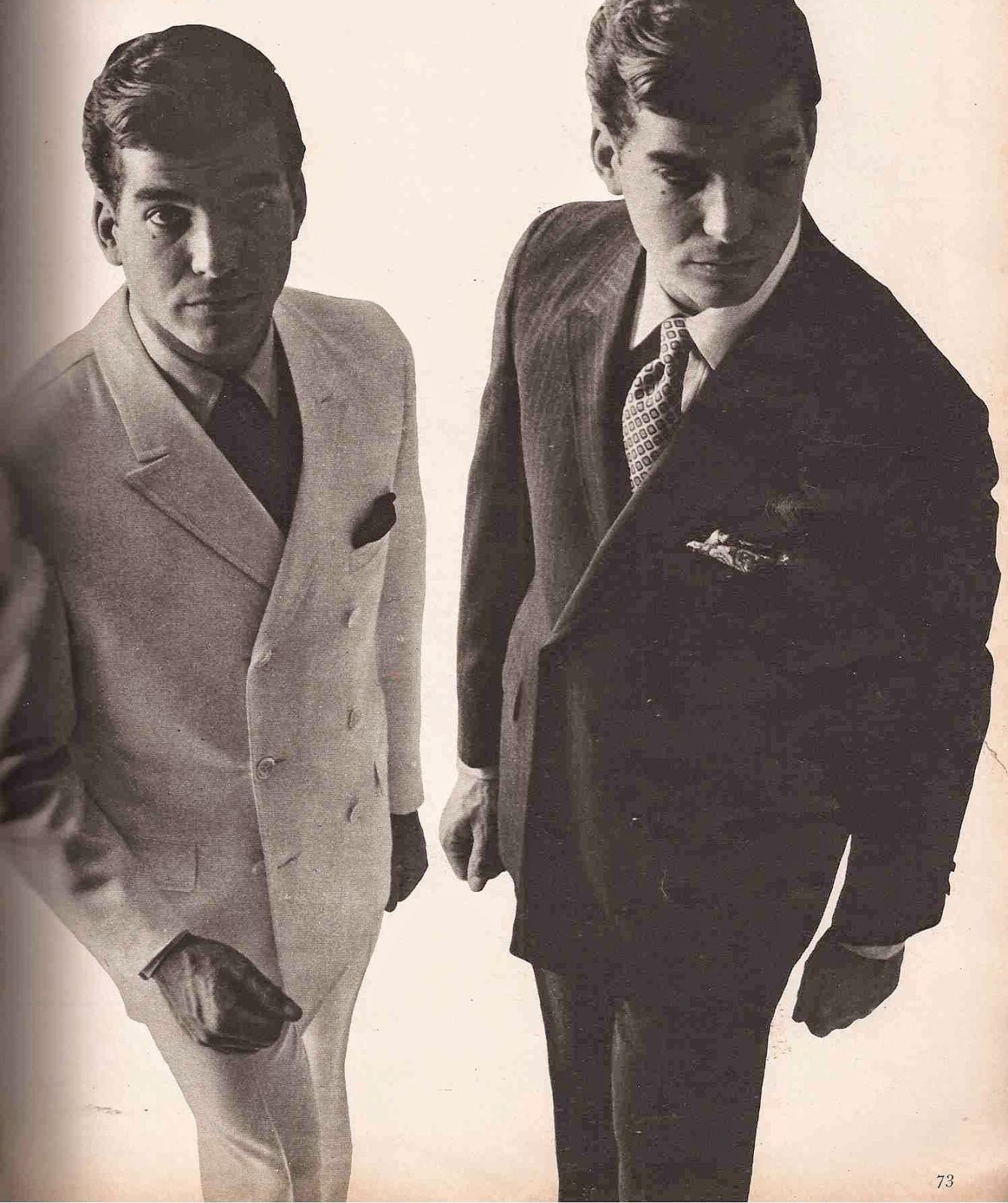 If you want to buy a new suit - make it a double-breasted. The white one is a St. Laurie, worn with an Excello shirt. The other, a four-button model, is a double-track pin stripe by St. Laurie with a Hathaway shirt. Ties by Prince Igor. 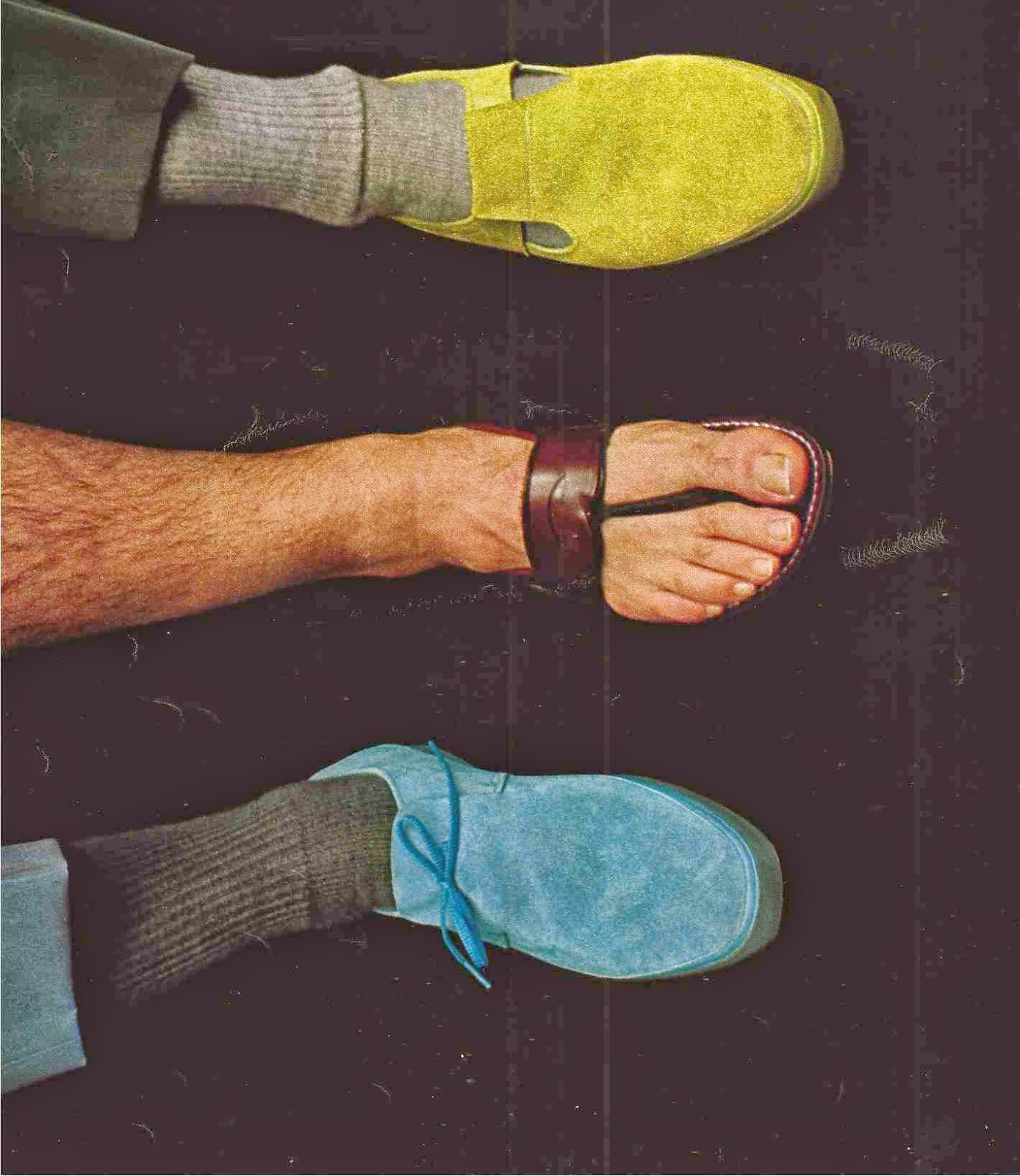 The biggest footnote is color - bright and wild. Shoes like these Bates floaters in pastel suedes with Goodyear crepe soles molded right on. The sandal in the middle resembles its famous cousin, The Weejun loafer, with its penny slot over the arch. 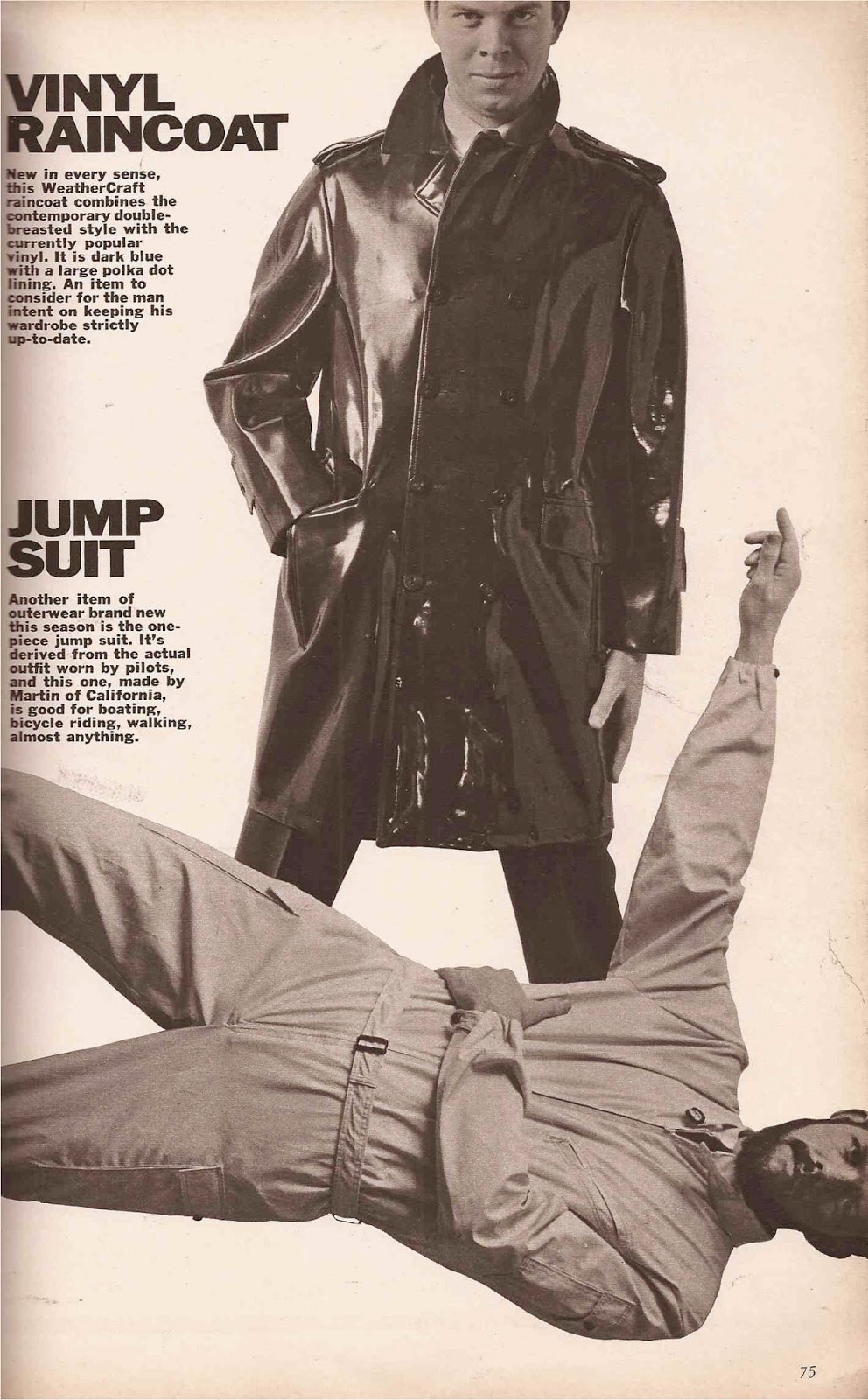 Vinyl raincoat. An item to consider for the man intent on keeping his wardrobe strictly up-to-date. Dark blue vinyl with a large polka dot lining.

Brand new look for the 'of-the-moment' male ... the jumpsuit: derived from the actual outfit worn by pilots. Made by Martin of California, it works for boating, bicycle riding, walking, almost anything.

All you need to bring is your game
editor

Combining jackets and slacks calls for at least one of them to have patterns. On the left, Stanley Blacker does a double-breasted, twin-vented tattersall check worn with white ducks. At right, plaid slacks by Anthony Gesture. 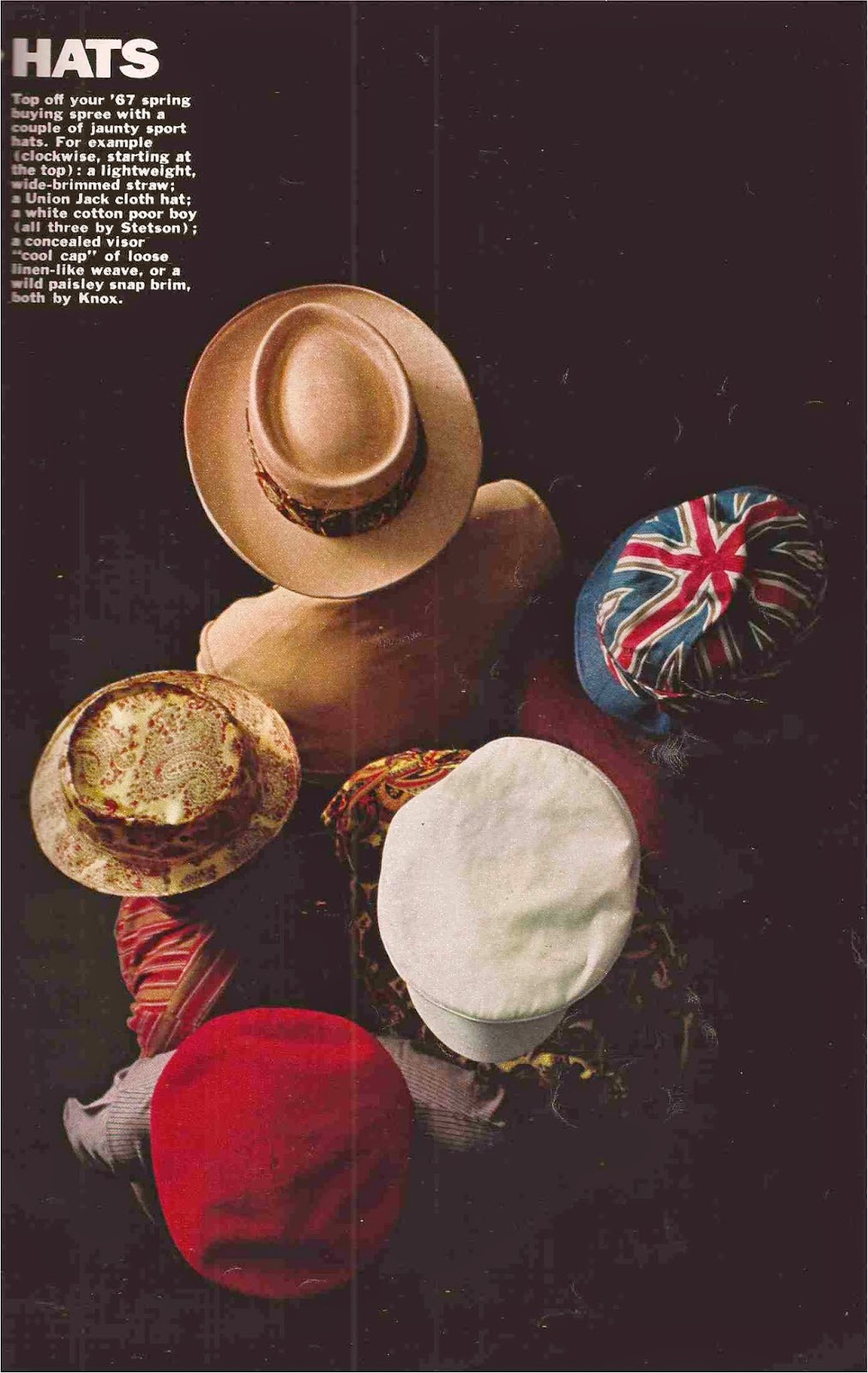 Top off your summer wardrobe with a couple of jaunty sport hats.
The lightweight wide-brim straw, Union Jack cloth, and white cotton 'poor boy' are by Stetson. The concealed visor "cool cap" of loose linen -like weave and the wild paisley snap brim are by Knox.

Posted by devodotcom-devocanada-femaleandfatal-vintimage at 2:30 PM