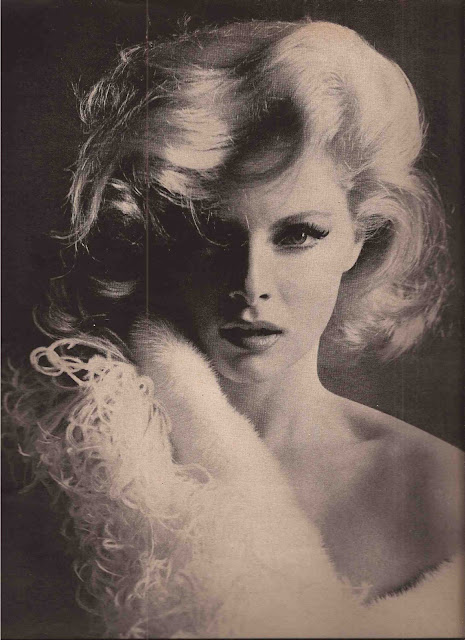 Virna Lisi
A green-eyed blonde Italian who roars around in a red Maserati, Virna Lisi has, until now, only graced the silver screens of Europe. This year she stars opposite Jack Lemmon in her first American film, How to Murder Your Wife. 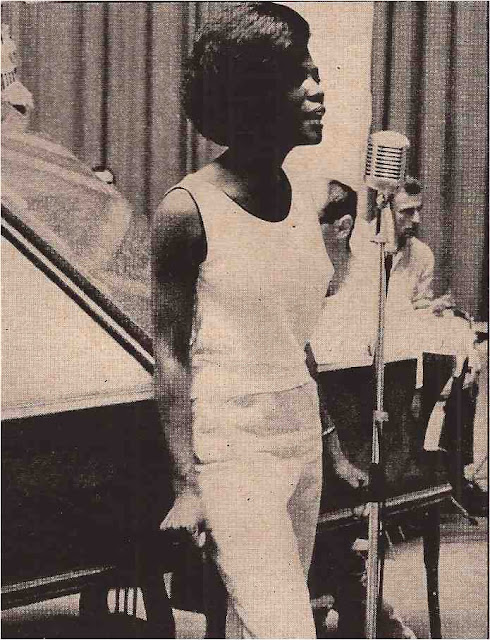 At twenty-four, Whitney Houston's aunt Dionne Warwick, was known in France as "la lionne d'East Orange,"New Jersey. A lioness, lionized, she had played the Olympia in Paris, the Palladium in London, been mobbed, headlined and screamed over. With hit records including "Walk On By" and "Reach Out For Me,"  she is soon to become a  big name in big places here in America. 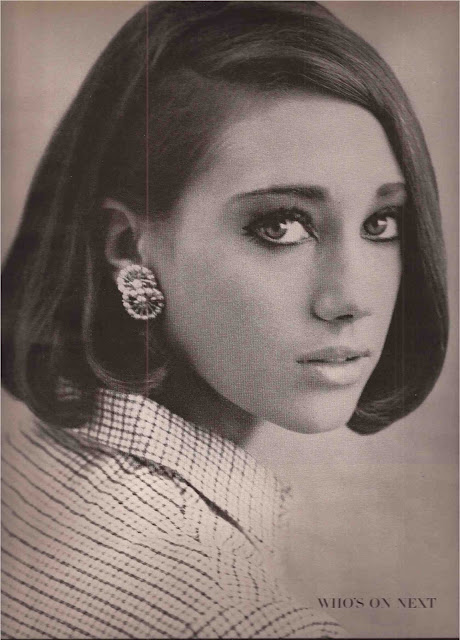 Marisa Berenson
Eighteen year-old Marisa Schiaparelli Berenson lives in Switzerland, skis a lot and paints. She is wild about dancing, clothes, and a career as a model. 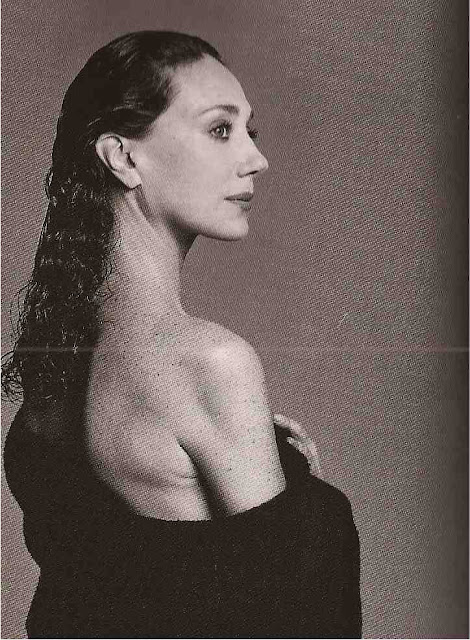 Marisa Berenson became a famous fashion model
... and is still beautiful at sixty-five 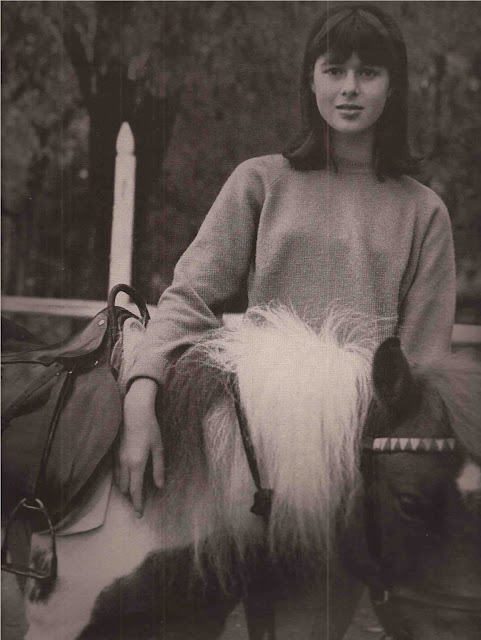 Thirteen year-old Pilar Crespi,studies in four languages. Dreams of a country life with a gentleman companion and at least four children. She adores being a girl. 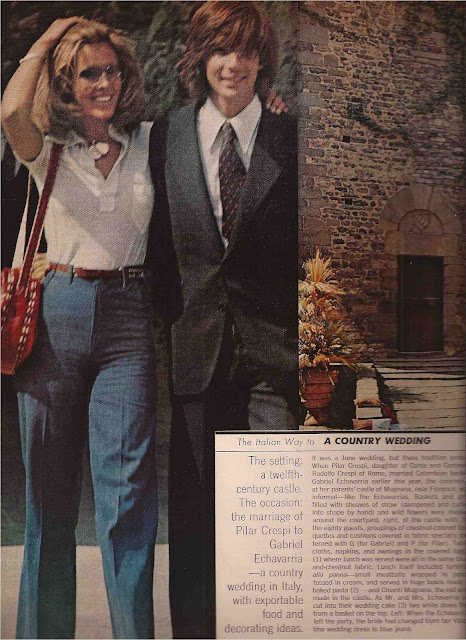 Eight years later,Pilar Crespi marries that country gentleman, Gabriel Echavarria, son of a diplomat and one of the first families of Colombia. The wedding - a country wedding in Italy, took place in a twelfth century castle.

The beautiful young couple lived happily ever after ... for a while Now a philanthropist, Pilar and husband Stephen Robert, are the founders of Source of Hope.  Her present country life is in New York City. 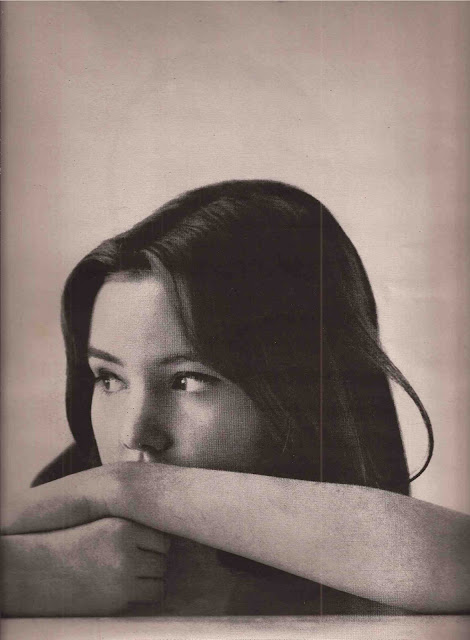 At sixteen,she is what she wants to be: an acting actress. Six years later she married Jones Harris, a freelance investigative reporter and son of the producer Jed Harris and actress Ruth Gordon. 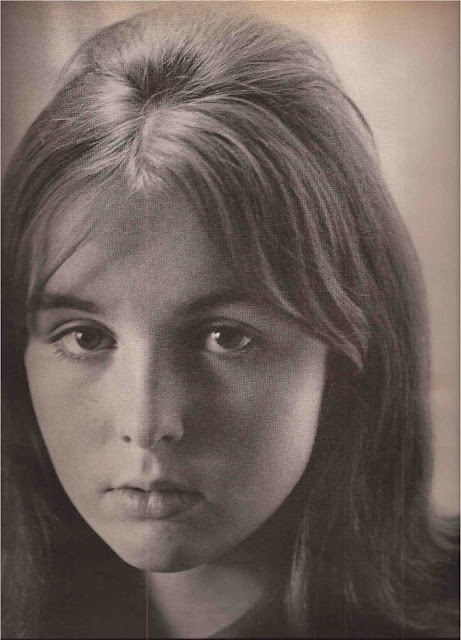 The daughter of Sir John Jacob Astor, fifteen and a smasher - very white skin, splash of gold-brown hair, eyes the colour of green grapes ripening. Two dreams: to pass her exams with some glory , to look like Jean Shrimpton. 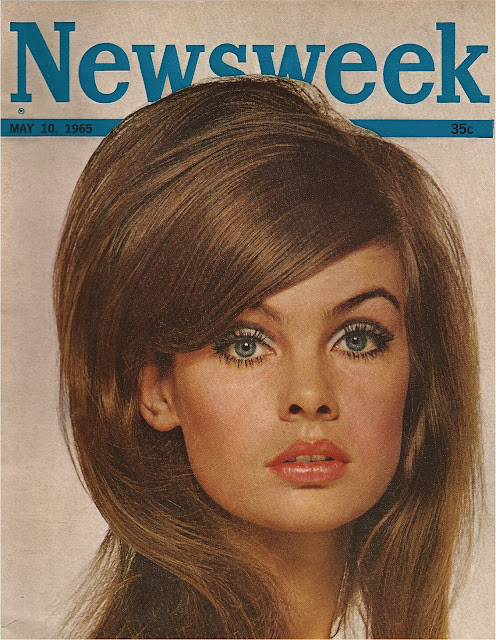 There is a marvellous moment that starts at thirteen and wastes no time. No Longer waits to grow up, but makes its own way, its own look by the end of the week. Gone is the once-upon-a-daydream world. The dreams, still there, break into action: writing, singing, acting, designing. Youth, warm and gay as a kitten yet self-sufficient as James Bond, is surprising countries east and west with a sense of assurance serene beyond all years.

The year's in its youth, the youth in its year.
Youthquake 1965 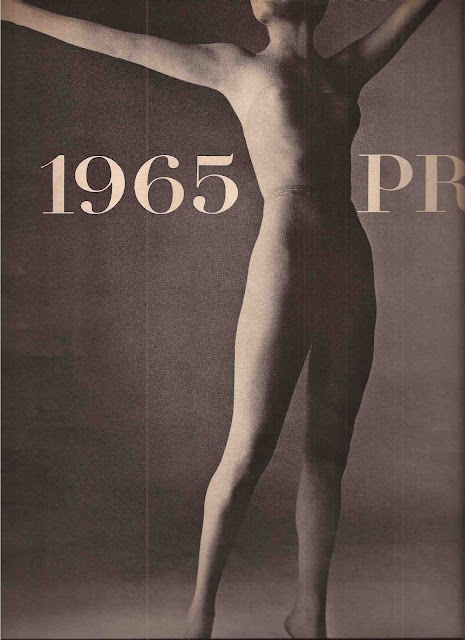 The Year of the Body
Photographs by Irving Penn 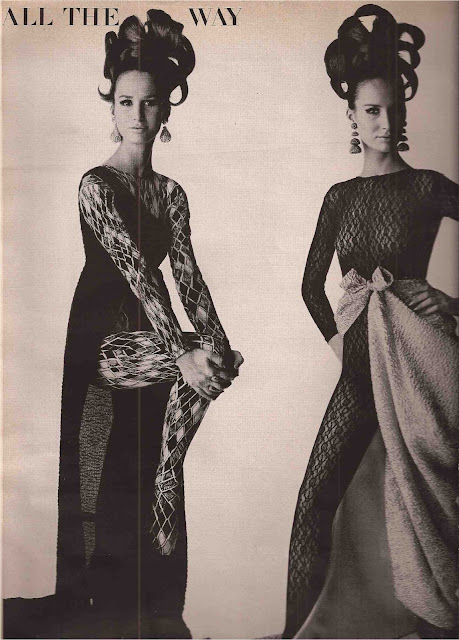 Revealing, concealing, enclosing the body from neck to foot ... 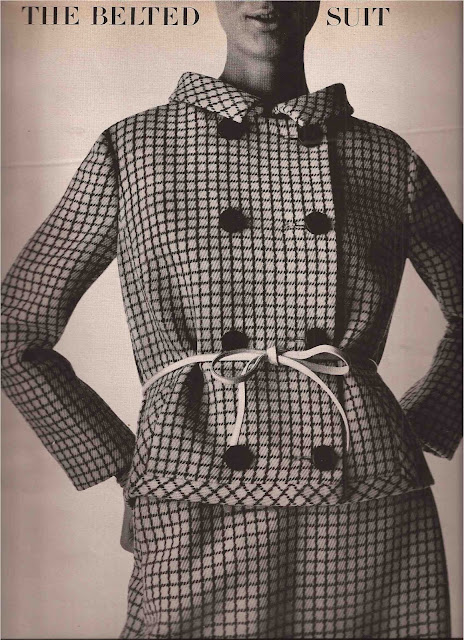 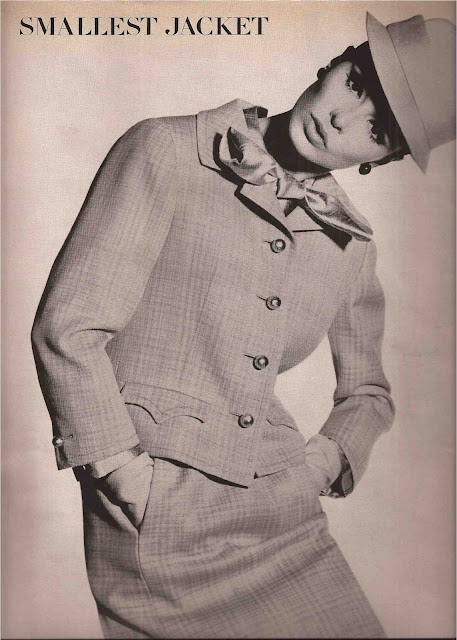 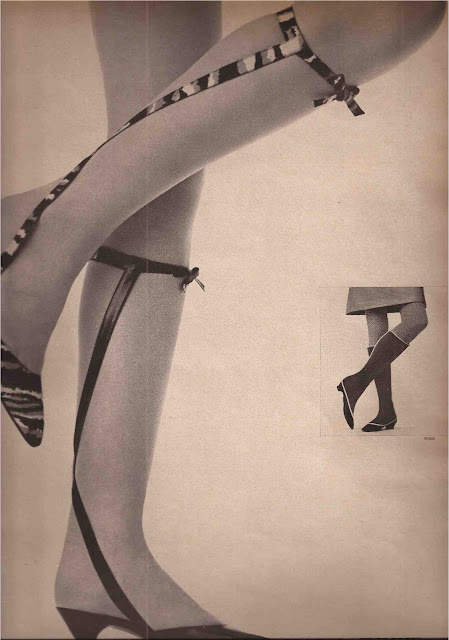 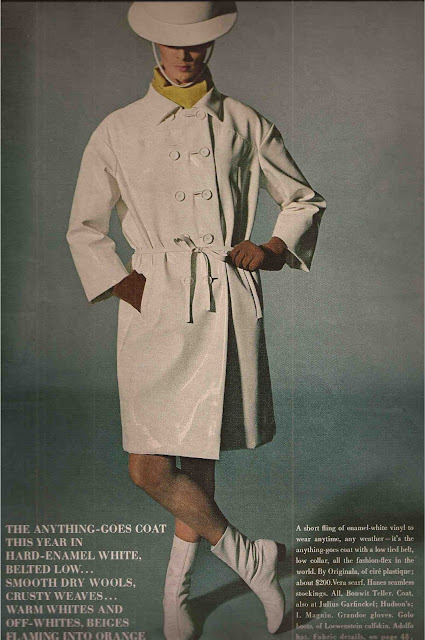 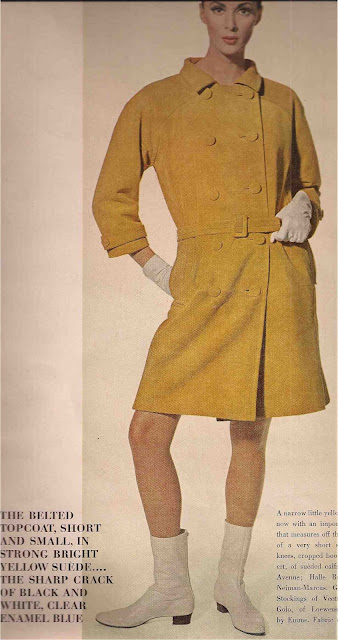 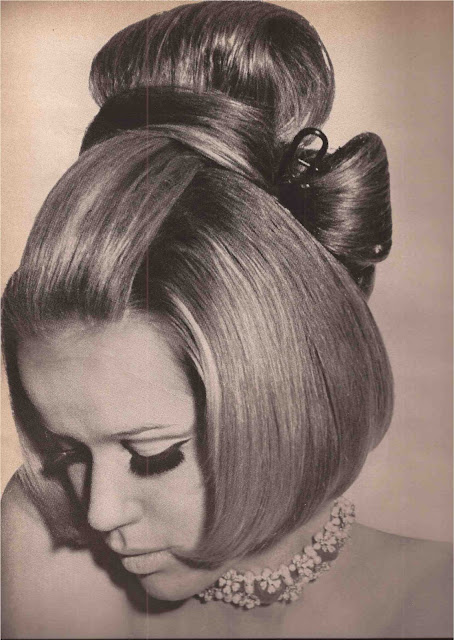 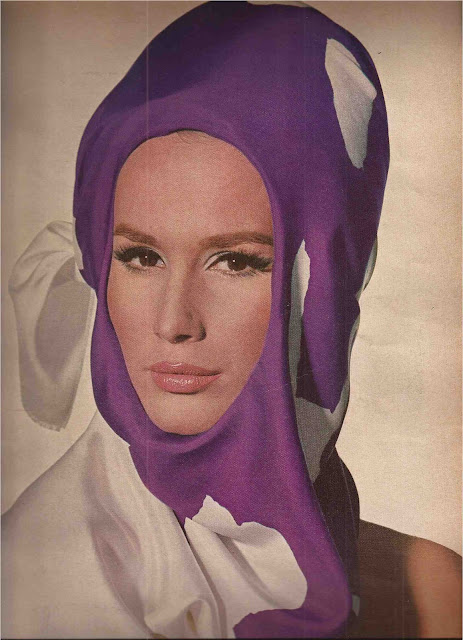 THE SCARFED HEAD
BY HALSTON 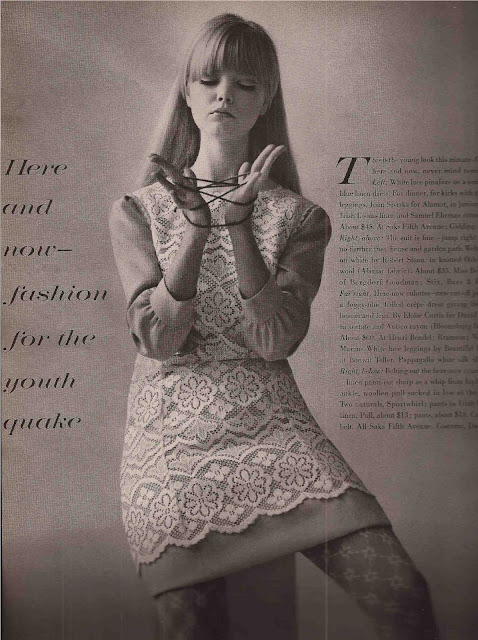 I remember like it was today, my mother coming home from a buying trip to Europe and taking me into the bathroom to cut my bangs just so. the idea was to create a graduated fringe low over the eyes and dropping mid-ear to create a frame for the face. She had seen the look on Elizabeth Taylor while in London and decided it was perfect for me. Along with the new 'do,' was a wonderful crayon yellow, white and navy chevron striped vinyl mini skirt (wish I had kept it,) Beatle jackets for my brothers - grey, collarless with black piping, and pairs of Mary Quant flowered white pantyhose like those above by Beautiful Bryans. These were all the rage in Europe. Unfortunately, my un-Twiggy-like legs just never could rock this look - a look best left to long and leggy skinny girls which, try as I may, I was not going to become.

I wisely stuck to the black version. 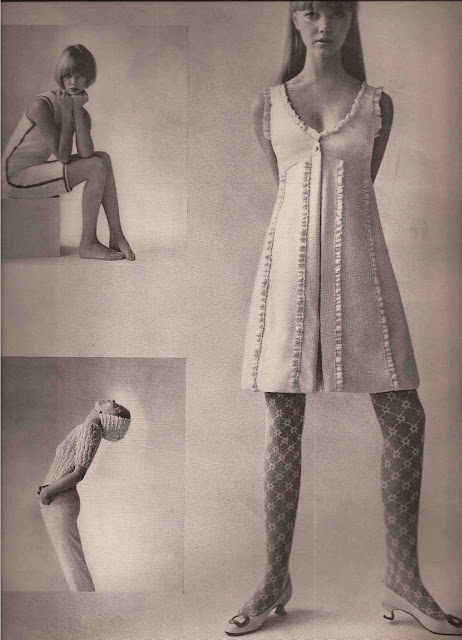 A poster-girl for the original 'London Look,' Ford model Paula Feiten was big on the pages of seventeen magazine and other popular fashion magazines of the sixties. A blonde version of the successful teen model Colleen Corby, both shared a similar pout and winsome look that was in demand after the arrival of Twiggy and her success on the international fashion stage. Feiten and Corby came to epitomize the new, young, mod look that was revolutionizing American fashion. 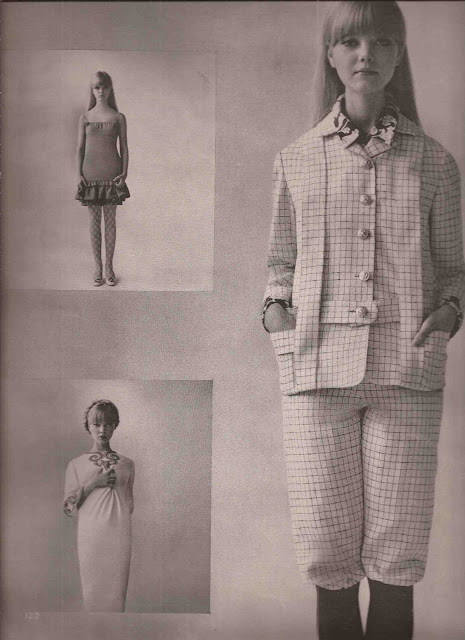 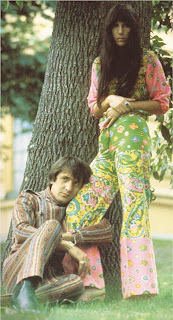 I got you babe ...devodotcom

Posted by devodotcom-devocanada-femaleandfatal-vintimage at 12:50 PM