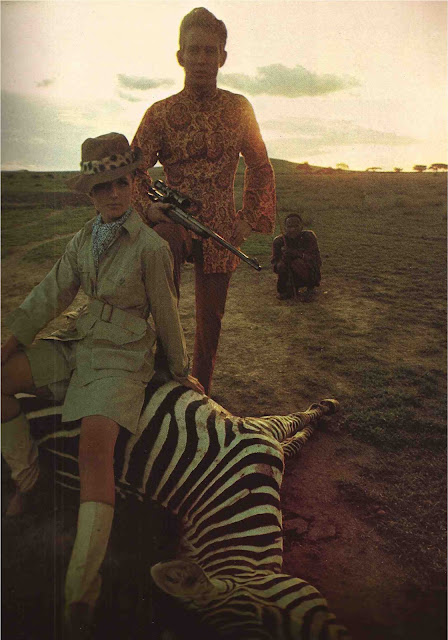 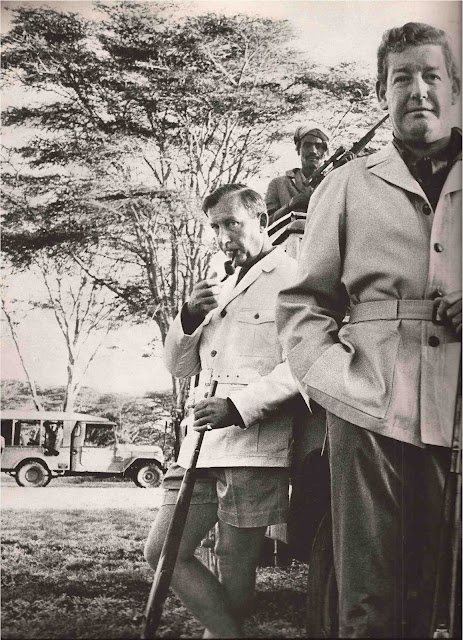 Right: Liam Lynn an Irishman who came to Kenya during the Mau-Mau uprising, wears a bush-inspired all-weather jacket by Zero King. On his left, David Ommanney - born in Jalgaon,India, educated in England, Ommanney has been in Kenya since he was nineteen. Here he wears an off-white cotton bush jacket by Europe Craft. 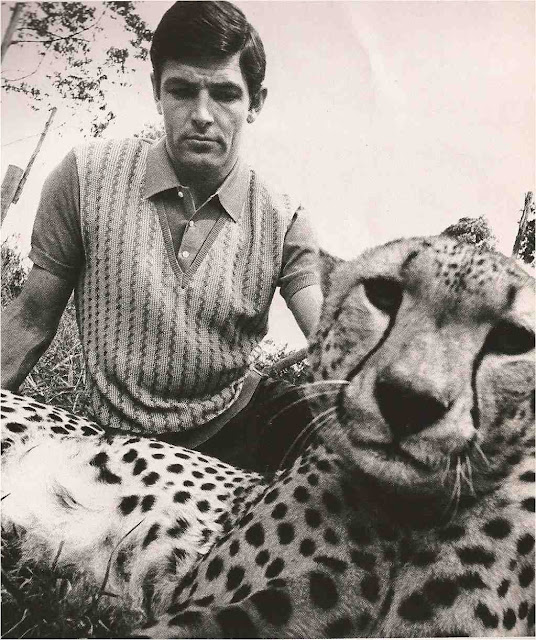 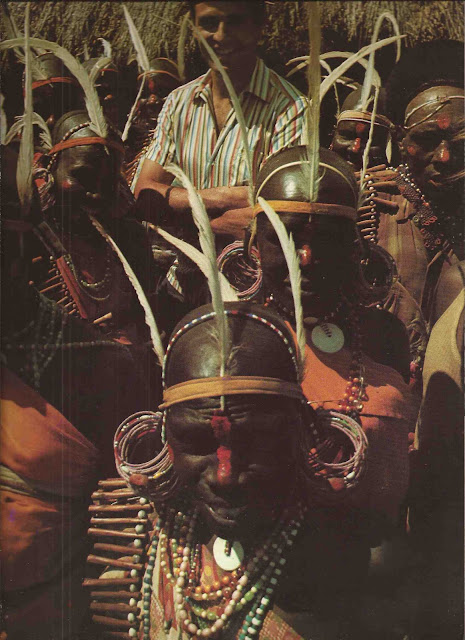 The Kikuyu, who inhabit a densely populated area near Nairobi, are the most Westernized of all the Kenyan tribes. They live in thatch-roofed wooden huts, or in simple houses. The Kikuyu are knowledgeable farmers, raising corn and market produce, tending coffee and banana plantations, Their children are taught English and French as well as Swahili. 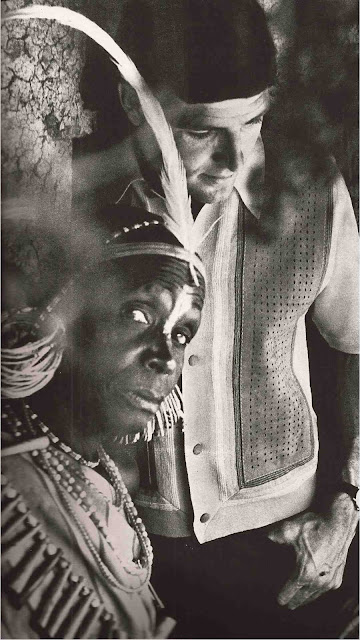 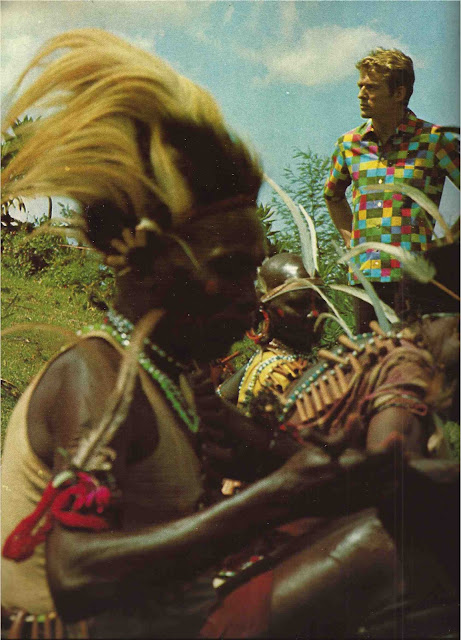 The Kikuyu in Ceremonial Garb 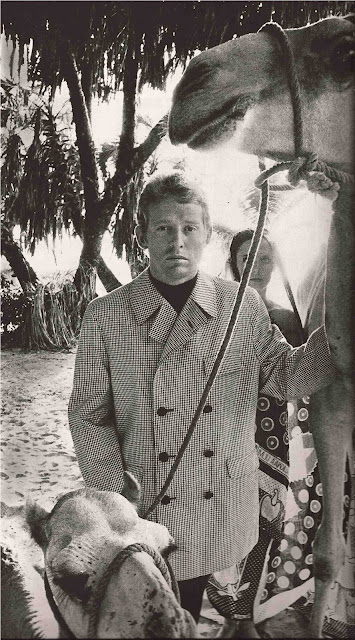 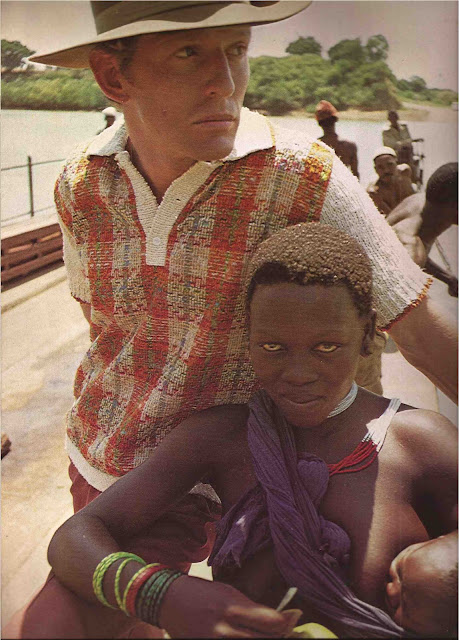 Traveling from Mombasa to Malindi, on the manually chain-pulled ferry which crosses Mtnapa Creek. Sweater: cotton-blend plaid front with three-button placket by Enro. 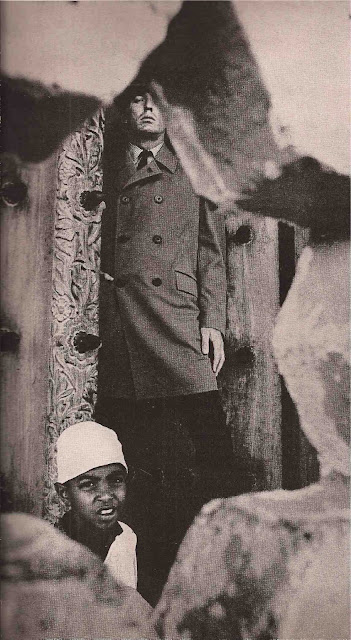 In an ornate Mombasan doorway, a taupe worsted gaberdine coat by Cortefiel 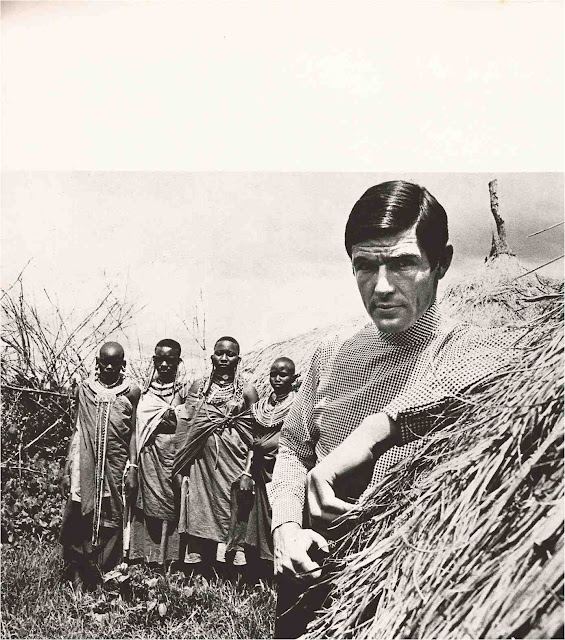 In 1957, freelance designer John Berg invited Steve Horn and another graphic designer, Norm Griner, to his engagement party. A friendship was struck and two years later, they formed Horn/Griner, a partnership that lasted fifteen years.

In the beginning, Horn/Griner was strictly a graphic design firm; shooting an occasional photo for a client's ad or record jacket. John Berg, just beginning his long association with Columbia Records, supplied them with most of their design assignments.
It wasn't until 1961 that Steve Horn's rather uneventful design career changed instantly with the click of a Hasselblad. Steve shot a double-page spread for I. Miller ladies shoes. The moment it hit the newsstands in Vogue, Steve Horn began his career as a professional photographer.

From 1962 to 1964, Steve made several extended trips to Europe on assignment for Elle and various other high-fashion magazines. While there, Horn noticed an increasing number of photographers using a wide-angle twenty-millimeter lens. Realizing its great visual potential in haute-couture photography, Steve became the first still cameraman to bring this trend to the United States. His work subsequently received rave reviews.

Throughout this period, Horn/Griner became the most sought-after tandem in the business.

Posted by devodotcom-devocanada-femaleandfatal-vintimage at 10:22 PM