dream machine
THE SECRETS OF SEDUCTION 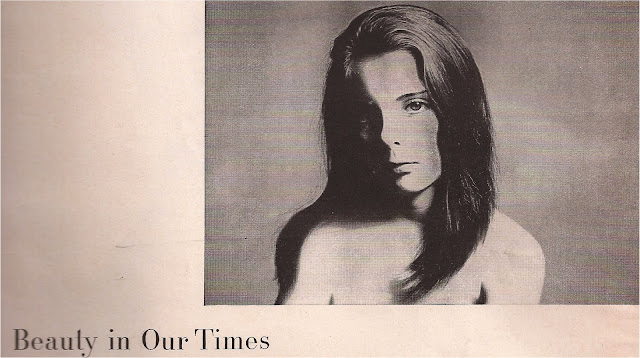 Miss Kitty Hawks, the seven-year-old daughter of Mrs. Leland Hayward and Howard Hawks:  pensive-eyed, with smooth dark blond hair, she wears the early promise of beauty – already evident, still unaware
Beauty in Our Times
To certain people at certain times in history, the pink rose has seemed the single standard of beauty:  a tranquil and naive ideal – and a strangely limiting one it would seem to us today. For we are fortunate to live in an era of great movement and event, of almost unrivaled discovery.  And so it is that our eyes are opened to many perceptions of beauty.  In our theatre, our films and novels and in our lives, it is no longer the vision of a young woman of twenty that dominates us. Beauty in a woman presents itself to us at all ages; and as something more than a bright eye and a pure profile.  Not only are we pleasurably affected by some small irregularities.  We seek for something in the look and bearing of a woman:  for beauty as a talent achieved … quicksilver, intensely personal, unique.  The contributions of art and science to the cultivation of a beautiful appearance have never been greater.
And to those women who have used them well, who wear an outward and an inward beauty of their own creation, we credit. 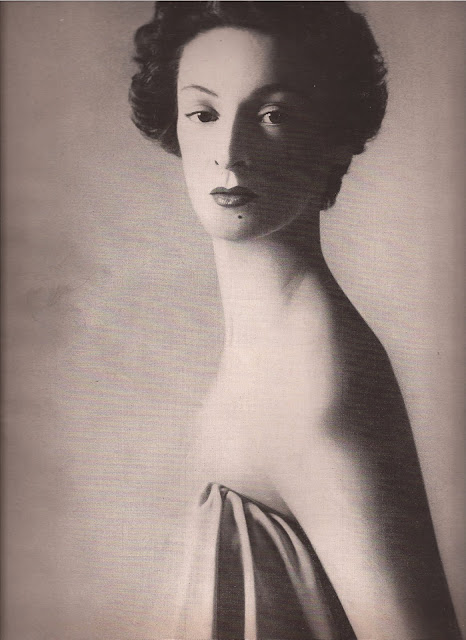 Signora Gianni Agnelli,  the former Marella Caracciolo: hers, a dark Italian beauty of a tightly drawn out, linear classicism; her extraordinary, extravagantly colorless looks borne out on the intensely personal atmosphere she creates for herself.


Beauties of Our Time
Photographed by Richard Avedon
Text by Truman Capote
That which we often call Beauty is a variable standard, dictated by ideas as transitory and short-lived as today. Beauty is more than this:  it is an ideal – difficult, distant, unfathomable – and we would not have it otherwise.
On these pages are six very dissimilar beauties, who illuminate the feeling we have about this eternal riddle.  Here is Beauty as an achievement.  This is not necessarily something one is born with; it is something created within the self.  And for most women, there is a mystical privilege to employ some artifice toward this achievement, to be worthy of another’s contemplation – a privilege championed. With poetic logic, in the following paragraph from Charles Baudelaire’s essay “In Praise of Paint and Powder.”
"Woman is absolutely right, and even performs a kind of duty, if she applies herself to appearing magical and supernatural; it is her duty to charm and cause wonder. Being an idol, she should gild herself to being worshipped. She must thus borrow from all the arts the means to raise herself above nature in order the better to subjugate the heart and strike the spirit.  It matters very little that the ruse and the artifice are known to all, if their success is sure and their effect always irresistible ... The use of powder, which has been so foolishly anathematized by the candid philosophers, has only this object and result: to remove from the complexion all the blemishes outrageously cast over it by nature, and to create and abstract unity in the textures and color of the skin, a unity which, like that produced by the chisel, immediately approaches the human being to the statue, that is to say, to a divine and superior being.  As regards the artificial black which borders the eye, and the rouge which marks the upper part of the cheek, although their use is derived from the same principle, from the desire to surpass nature, the result is of a kind to satisfy an altogether opposite desire. The rouge and black represents life - a supernatural and excessive life; the black frame makes the eye look deeper and stranger, and gives it a more decided appearance of a window opened upon the infinite; the rouge, which sets the cheekbone on fire, still further increases the light of the pupil, and adds to a beautiful feminine face the mysterious passion of a priestess.  Thus, if you understand me properly, the painting of the face should not be used for the vulgar unknowledgeable object of imitating beautiful nature or of rivaling youth.  Besides, observation proves that artifice does not beautify ugliness and can only be of service to beauty. Who would dare to  assign to art the sterile function of imitating nature?
Make-up has no need to hide itself: it may, on the contrary, expose itself, if not with affection, at least with a kind of frankness.  Those who are prevented by their heavy seriousness from searching for the Beautiful even in the minutest manifestations have my ready permission to laugh at my reflections; I shall content myself with appealing to real artists, as well as to those women who were given at birth a spark of the holy fire with which they would like to be altogether illuminated."
-from Constantin Guys, the Painter of Victorian Life 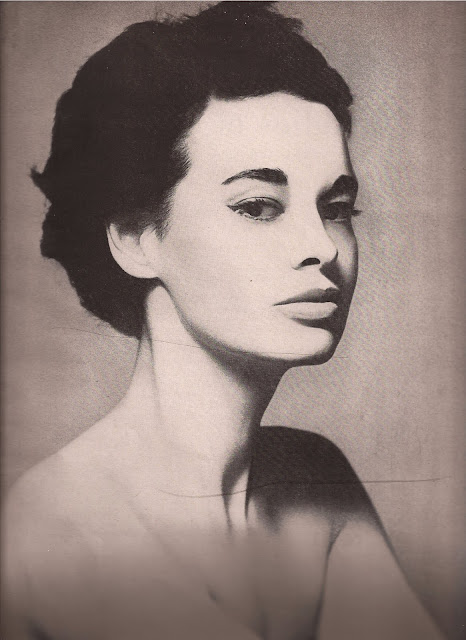 Mrs. Leopold Stokowski,  the former Gloria Vanderbilt, has a snow white skin and the small, perfectly shaped head of a little Greek statue.  About her looks there is a poetic quality that suggests the presence of sensitivity and talent; in her attitude, an eager generosity, intent on giving to the world and learning from it. 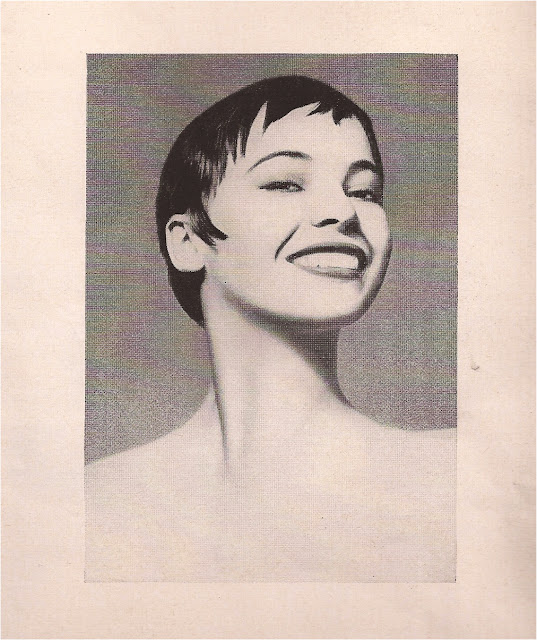 Leslie Caron has the looks of a musing, happy child - a mobile, eager-eyed face that can make every emotion, including happiness, surprisingly touching; a face whose charmed imperfections seem its special delights.  In her next film, a Cinderella fantasy called The Glass Slipper, she dances again with Les Ballets de Paris. 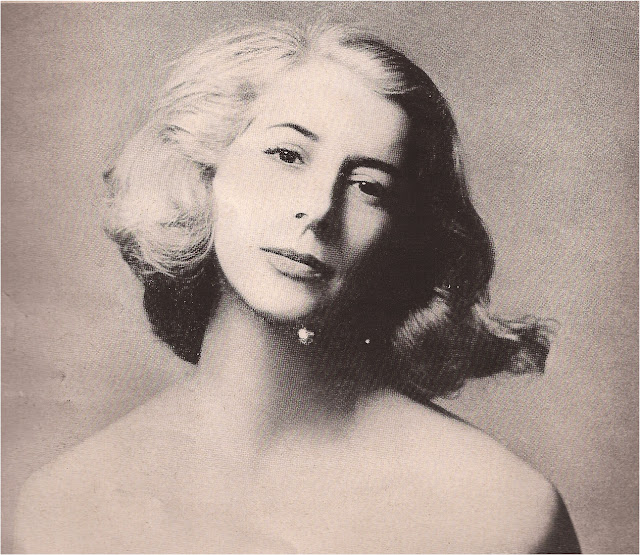 Contessa Madina Arrivabene moves in an aura of the complete romantic, has the romantic looks of the fair Venetian. Her blond and silver hair floats carelessly about an oval face poised on a long white neck; she is living proof of Sir Francis Bacon's famous observation, "there is no beauty which hath not some strangeness in its proportions." 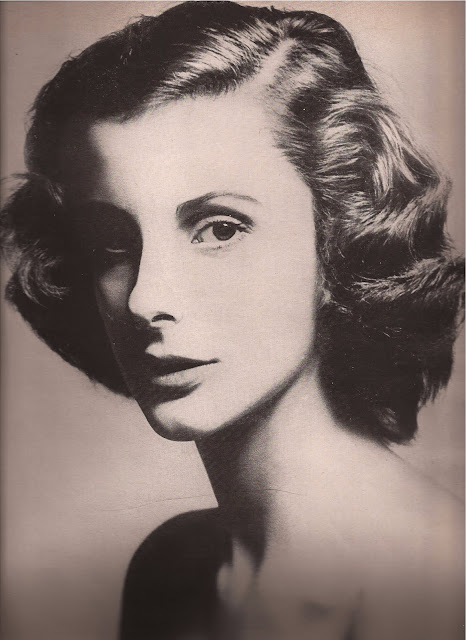 Miss Dolores von Furstenberg has already, at seventeen, the long bones, the assured look of a great beauty; and in her manner a certain youthful stillness, a look of inquiry, tentative, waiting.  She is the daughter of Mrs. Loel Guinness, herself a classic, dark-eyed Latin beauty, and Count Franz Egon von Furstenberg.

Posted by devodotcom-devocanada-femaleandfatal-vintimage at 10:57 PM